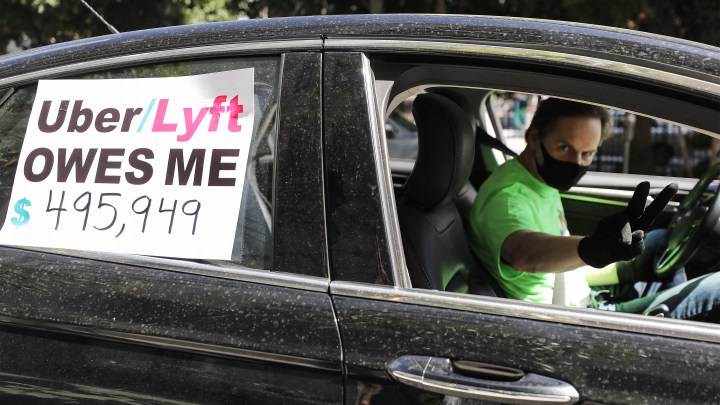 COPY
A driver's sign says Uber and Lyft owe him money. The rideshare companies have been forced to downsize. Mario Tama/Getty Images
COVID-19

A driver's sign says Uber and Lyft owe him money. The rideshare companies have been forced to downsize. Mario Tama/Getty Images
Listen Now

During the daytime, Jonathan Miller is a 10th grade English teacher in Austin, Texas. But for the last couple of years, at night and on the weekends he drove for Uber and Lyft to supplement his teacher’s salary. Then, the second week of March hit.

Uber and Lyft sent him emails about how to stay safe and how to earn money elsewhere because right now, the demand for rides just isn’t there.

“If it was, I would totally do it. I would just wear a face mask the whole time, but it’s just totally not worth it doing rideshares,” he said.

Miller is still in the gig economy, delivering food for Uber Eats instead.

The two biggest rideshare companies, Uber and Lyft, have quarterly earnings calls this week — Lyft after the markets close Wednesday and Uber on Thursday. Ridership is way down for both, and both have furloughed and laid off full-time employees. What lies ahead for these companies?

Daniel Ives, an equity analyst at Wedbush Securities, said numbers for Uber and Lyft are down about 60% from last year. And Uber Eats is only a small hedge against that decline.

It’s worth pointing out, though, that Uber Eats still isn’t profitable.

Uber and Lyft, like many other businesses in the gig economy, have to assure investors they’re set up for growth over the short and long terms, which Ives said might be a tough sell.

“We think about 30% of revenue from the gig economy, which is Airbnb, Uber, Lyft, is what gets cut over the next one to two years, and maybe half of that disappears, never comes back,” he said.

But Gene Munster, a founding partner at Loup Ventures, is a little more optimistic.

“I think human behavior is moving to these ridesharing networks. I think there’s just a lot of friction around car ownership, and all the things that existed before, all those growth themes, exist after,” he said.

Munster said the next six months to two years are going to be tough for Uber and Lyft.

This week, the California attorney general sued both firms, claiming that under a new state law, Uber and Lyft had misclassified their drivers as independent contractors.

For drivers, applying for unemployment benefits in the gig economy is complicated.

Alexandrea Ravenelle wrote a book about the sharing economy called “Hustle and Gig.” She said Uber and Lyft have to verify how much money an individual driver was making for the contractor to file with the federal government.

“Many of these platforms are very much dragging their feet to do this,” Ravenelle said.

They’re dragging their feet because they don’t want to give states like California more ammunition to claim that Uber and Lyft drivers are employees and not contractors.

“And if workers are unemployed, due to not getting work off of these platforms, the platforms might be required to contribute to the unemployment insurance funds,” she said.

Another expense for gig economy companies that are already struggling.