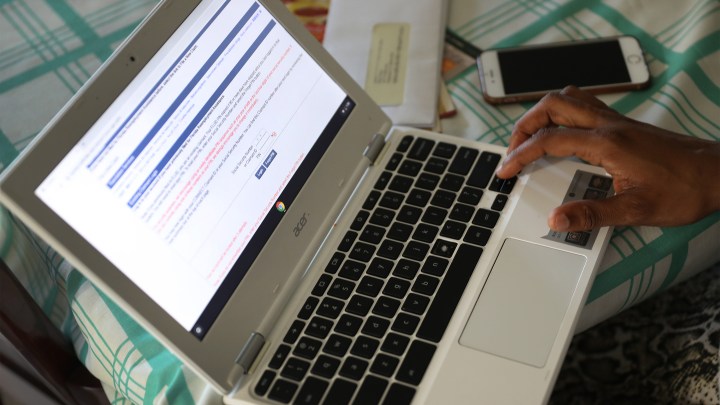 COPY
Many states aren't accepting claims yet as they ramp up and adapt their computer systems. Joe Raedle/Getty Images
COVID-19

Many states aren't accepting claims yet as they ramp up and adapt their computer systems. Joe Raedle/Getty Images
Listen Now

Approximately 17 million Americans have filed claims for state unemployment benefits since mid-March, when layoffs and business shutdowns began to soar due to COVID-19. Tomorrow, the Labor Department will report last week’s new claims; another 5 million are expected.

Claimants are stressing state unemployment websites and phone lines. The strain is likely to remain elevated as states begin to accept claims from people who are newly eligible under the Federal Pandemic Unemployment Compensation program, which pays all recipients $600 per week extra until July 31, adds an additional 13 weeks of benefits and expands eligibility to include gig workers and the self-employed.

Even then, a lot of people who aren’t working because of the pandemic can’t get unemployment benefits. White House, Tennessee-based Carol Norman, 77, works as a seamstress earning $15.50 an hour in a factory near Nashville.

The factory, which customizes uniforms for first responders and military personnel, is considered an essential business; it hasn’t been ordered to close. That worried Norman’s family.

“We were all trying to put some pressure on her to stay at home,” said her grandson, Colby Woodis. “She’s from that generation that’s very committed to work and she’s the hardest-working person I know.”

Norman eventually agreed to stay home. “I talked to my supervisor and decided the best thing would be to take a leave,” she said. “My husband is 80 and he has a lung problem. I didn’t want to go in and take the chance of getting something myself and bringing it home to him.”

Her company paid part of her salary for the first two weeks, but she isn’t sure how long that will continue. “They say that I’m not eligible for unemployment because they are not shut down,” she said. “I’m not actually laid off, I just took a personal leave.”

People aren’t eligible for unemployment benefits under the new federal program if they quit or take a leave to protect their own health or the health of a family member — unless they have a COVID-19 diagnosis or a doctor’s note. That’s according to Department of Labor guidance.

Gig workers, independent contractors and the self-employed are generally ineligible for state unemployment benefits, but are eligible for the new pandemic benefits. But many states aren’t accepting those claims yet.

Maarten de Haan, 22, is convinced he won’t be eligible for the new program based on his former gig work as a tutor. He’s a senior at Florida State University, now at home finishing his senior year in physics. He used to tutor undergraduates for 20 hours per week at $30 an hour. Then classes went online.

“The university decided to move all classes to pass-fail,” he said. “Most of my students were wanting to get A’s, they switched to pass-fail because it’s easier, and all of my tutoring sessions have cancelled. As a student working privately, I find it very difficult to file for unemployment because I don’t have an employer.”

De Haan also won’t qualify for a stimulus check, because as a student he’s classified as a dependent on his parents’ taxes.

For many who aren’t working due to COVID-19, confusion and apprehension rein. Tulsa, Oklahoma-based Brian Forrester, 52, started an online application for the new federal unemployment benefits a few weeks ago and almost gave up when he saw a warning that misstating facts could lead to a substantial penalty.

“I know under the old system, the ‘before-COVID’ system, I didn’t qualify,” he said. That’s because his last job was doing seasonal deliveries for UPS — it only lasted six weeks — and he left voluntarily.

In early winter, he was offered a job as a fieldworker for the U.S. Census Bureau, making $17 an hour. The job was supposed to start in March, but training sessions were cancelled as the virus spread, and he doesn’t know when training will resume.

“So I’m kind of out of a job,” he said. “I can work. I want to work. And I have a job, technically, but not technically, because we haven’t officially started yet.”

Forrester doesn’t know if he’s been approved for unemployment benefits under the regular state rules in Oklahoma or the new federal program. He hasn’t received his stimulus check yet. And he just learned that the census won’t restart until at least June. He called it all “worrisome.”