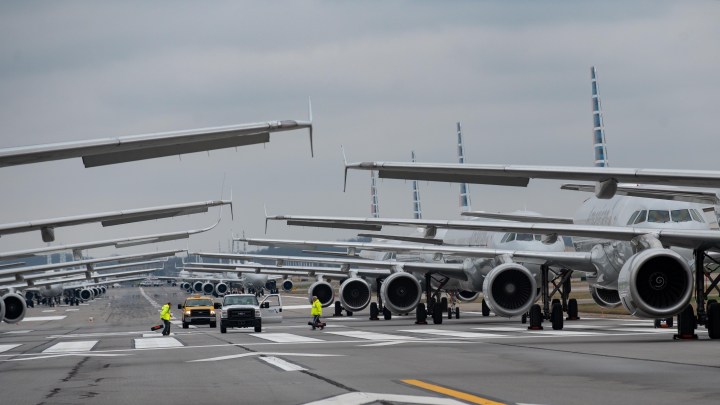 COPY
United, Delta and American have parked almost their entire international fleets, and domestically will fly about 60% to 70% fewer flights than at this time in 2019. Jeff Swensen/Getty Images
COVID-19

United, Delta and American have parked almost their entire international fleets, and domestically will fly about 60% to 70% fewer flights than at this time in 2019. Jeff Swensen/Getty Images
Listen Now

Friday is the first deadline for airlines to apply for $50 billion in federal loans and grants to help them survive this public health crisis.

The money comes with conditions. Airlines have to keep their employees on the books, and they have to maintain a certain number of flights, even if that means empty planes.

The drop off in the number of people flying has been dramatic, according to airline industry analyst Robert Mann.

“The traffic and associated revenue has essentially gone down almost 94% from the year prior in about 4 weeks,” Mann said.

He says United, Delta and American have parked almost their entire international fleets, and domestically will fly about 60% to 70% fewer flights than at this time in 2019. And the flights that are still flying are losing money, Mann adds, because they’re not carrying many passengers.

But, to qualify for the full government assistance, Airlines can’t just ground all their planes. They can reduce the number of flights, but have to maintain service to major hubs.

According to Samuel Engel, aviation consultant at ICF, that’s explained by the same logic that says airlines are important enough to the economy to need a bailout in the first place: that airlines are a “critical national infrastructure,” carrying health care and other essential workers right now, as well as goods and supplies.