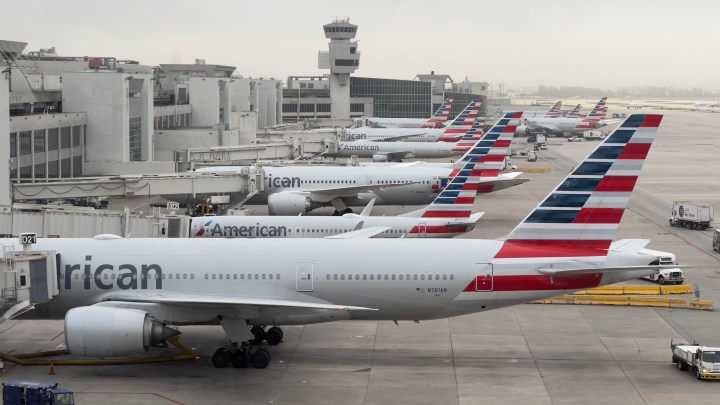 The U.S. and China are in a tiff over airline flights.

Between Dec. 31 and Jan. 19, China’s Civil Aviation Administration canceled 44 flights on U.S. carriers scheduled to go from the U.S. to China. The reason given was that previous flights on those carriers — Delta, United and American — brought several people who the Chinese government said later tested positive for COVID-19.

In response, the U.S. Department of Transportation canceled the same number of flights —  44 — on Chinese carriers.

Chinese Embassy spokesperson Liu Pengyu told Marketplace in a statement that there had been a notable increase in the number of COVID cases entering China since June 2020 and that this triggered a “circuit-breaker policy” for many China-bound international flights.

“It is very unreasonable for the U.S. to suspend Chinese airlines’ flights on this ground,” Liu said. “China’s action is to protect the health and safety of all the passengers while the U.S.’ is retaliation. We urge the U.S. side to stop disrupting and restricting the normal passenger flights operated by Chinese airlines.”

China’s view is in line with its zero-COVID approach, said Scott Kennedy, a senior adviser at the Center for Strategic and International Studies.

“They don’t have an effective vaccine. They are extremely worried about what would happen if COVID started to spread again widely in China and the toll that would take on their population, their economy, the Communist Party’s hold on power,” he said.

The Department of Transportation — and this country’s airlines — take issue with the way China has carried out its COVID control policy. The department said China’s Civil Aviation Administration is violating a decades-old agreement between the two nations on maintaining reciprocal access by air, specifically “to provide capacity as agreed by both parties.”

Spokesperson Liu Pengyu said that China’s procedures for dealing with COVID had been “formerly accepted and implemented by the U.S. airlines,” but the U.S. Department of Transportation said China didn’t follow those procedures and instead canceled flights wholesale.

Airlines would normally be allowed, under Chinese rules, to suspend a flight for two weeks after a four-week grace period or reduce capacity by 40%. Airlines were not given that option and had their flights canceled instead.

A Delta flight to Shanghai reversed course in midair and returned to Seattle on Dec. 21, after Chinese regulators suddenly announced new cleaning regulations the same day that the airline said were not workable.

The U.S. canceled the 44 flights on Chinese carriers in response, an action that Holleyman called “narrowly tailored to foster a resolution.”

“It’s kind of tit for tat, ‘You cancel ours, we cancel yours,’ and this has happened on numerous occasions in the past,” said consultant Robert Mann Jr., a former airline executive.

“It’s not an open skies market,” he said, meaning U.S.-China flights are tightly controlled by both governments. So moves limiting flights for any reason are often met with reciprocal responses — and not just China, but other countries with similar arrangements, like Brazil.  In principle, “it’s par for the course,” Mann said.

“What is unique,” argued Holleyman, “is the unilateral way in which China has sought to stop the flights from carrying passengers without the ability of the U.S. carriers to control what happens to the passengers after they arrive in China.”

China’s government is in charge of approving passengers for flight, not airlines. The Department of Transportation argues that airlines should not be punished for something that’s under the control of the Chinese government.

Chinese Embassy spokesperson Liu said that all airlines from all countries are treated equally based on how many coronavirus cases they have.

Michael Boyd, president of aviation consulting firm Boyd Group International, is skeptical. “You know, the Chinese will say, ‘We found a number of sick people coming in on United Airlines or Delta Air Lines,’ or whatever — I wouldn’t believe that for a second.”

His view is an indication of the high level of distrust between the two sides. Boyd suspects China may have inflated the number of sick passengers as an excuse to shut down air travel and keep COVID out during the Olympics. The omicron variant was surging in many countries when these flights were canceled — and surging astronomically in the U.S.

Yet the economic stakes are not particularly high right now. “There’s no tourists going back and forth between the U.S. and China. Business travel is pretty much way down,” Boyd said. “We’re arguing about who gets the right to operate empty airplanes.”

In 2016, he estimated, 8 million people flew between the U.S. and China. Boyd predicted that in 2022, there will be fewer than 1 million.

“Poof that marketplace is dead,” he said. “It’s not just because of COVID,” but because of the deteriorating relationship between the two countries.

So, the U.S. and China are playing, in a sense, on an empty field — plenty of room, he said, for political games.