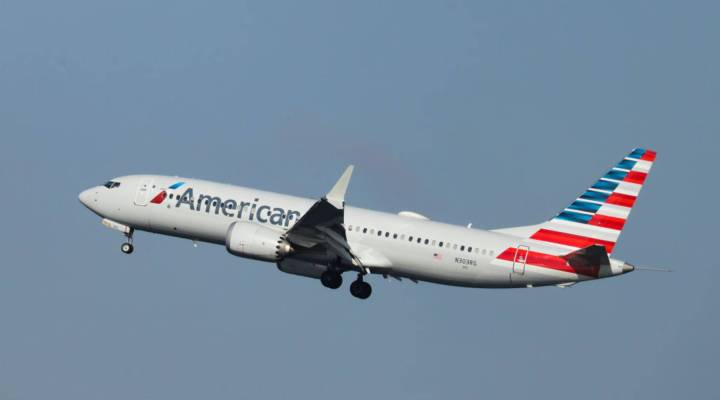 An American Airlines Boeing 737 Max 8, on a flight from Miami to New York City, prepares to land at LaGuardia Airport on Monday morning, March 11, 2019 in the Queens borough of New York City.  Drew Angerer/Getty Images

An American Airlines Boeing 737 Max 8, on a flight from Miami to New York City, prepares to land at LaGuardia Airport on Monday morning, March 11, 2019 in the Queens borough of New York City.  Drew Angerer/Getty Images

Chances are you won’t be riding on a Boeing 737 Max during your summer vacation travels.

“We feel great confidence that the airplane will be recertified. However, we don’t have certainty on when that date is. And so we think with our customers in mind first,” Vasu Raja, American Airlines’ vice president of network and schedule planning, told Marketplace’s Kai Ryssdal in an interview.

According to data from Flightradar24, the top 5 busiest 737 Max routes for the first week of March (the last full week of normal operations) were:

American Airlines has concentrated its 737 Max flights along east coast routes, accounting for the high number of flights between New York City and Miami, according to Ian Petchenik, a spokesman for Flightradar24. Petchenik also explained that Chinese airlines, along with the Canadian airlines Air Canada and WestJet, are leading customers of the Max.

“Southwest is less likely to have multiple flights per day in the same city-pair because of how it spreads its aircraft throughout its network of flights in a spider-web fashion,” said an Airline Data Inc. spokesman. “Carriers like American and United typically have their planes go out and back from their hubs to a ‘spoke’ on their network, hence the name ‘hub-and-spoke’ when referring to the large network carriers.”

Here’s a breakdown of the frequency of some typical routes where these U.S. airlines will use the Max on a sample day in August, according to Airline Data: