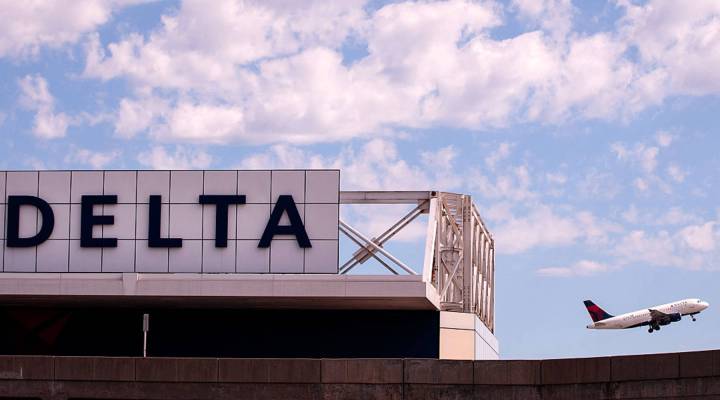 COPY
A Delta jet takes off at LaGuardia Airport , August 8, 2016 in the Queens borough of New York City. Delta flights around the globe were grounded and delayed on Monday morning due to a system outage.  Drew Angerer/Getty Images

A Delta jet takes off at LaGuardia Airport , August 8, 2016 in the Queens borough of New York City. Delta flights around the globe were grounded and delayed on Monday morning due to a system outage.  Drew Angerer/Getty Images
Listen Now

Delta flights are gradually resuming after a massive power outage in its Atlanta computer systems left passengers and ticket agents unable to access tickets, stranding thousands of planes on the ground this morning.  About 450 flights were canceled and thousands more delayed.

Delta’s not alone, of course – Southwest had an outage three weeks ago that caused the cancellation of 2,000 flights.

“Three of the four largest carriers in the U.S. have gone through this now,” said George Hamlin, president of Hamlin Transportation Consulting. “Different reasons, different times, and they’re not necessarily connected.”

It’s tempting to point to the airlines’ basic computer systems, many of which are quite old.

“Airlines work with a variety of systems, some of are based on 1950’s architecture,” said Robert Mann, president of RW Mann and Company. But around that basic framework has grown a massive network of often state-of-the-art systems. “It’s a hybrid,” he said.

For most airlines, the old computer systems themselves have worked well. The vulnerability, Mann says, comes from fact that IT networks and systems built up around them are so numerous and complex. As airlines merge and offer more options to passengers, the complexity grows.

“Network failures are just a function of an increasing numbers of network devices in use,” said Mann.  “You lose reliability when the weakest link in the chain is broken.”

Delta’s on-time performance had been far and ahead of the competition, according to analysts, and its network technology is actually in better shape than that of carriers like Southwest. It seems to have been undone by something comparatively old fashioned.  A simple power switch malfunctioned, Mann said, probably while they were testing it out.