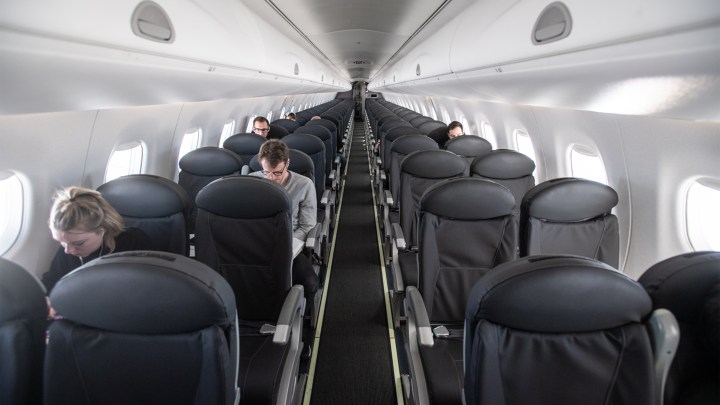 American Airlines and Delta are the latest to say they’re cutting schedules as a result of plummeting demand for flights.

AA is cutting international capacity by 10% for the summer peak. Delta says it’ll slash 20% to 25% of overseas flights, and 10% to 15% of domestic flights.

Because of COVID-19 people don’t want to, or can’t, travel as much as usual. Together with the 737 MAX groundings, it’s been a tough year for airlines.

Today is the one year anniversary of the crash of Ethiopian Airlines flight 302. It was the second Boeing 737 MAX to crash, and prompted a global grounding of the plane, leaving some airlines without enough capacity last summer.

Now, because of COVID-19, they’re facing the opposite problem.

“Airlines have seen demand fall by half or more. On some routes, demand has simply disappeared completely,” said Perry Flint with the airline industry group IATA. Its figures show, depending on how COVID-19 plays out, the revenue loss for the global industry could go as high as $113 billion. “In response to that, they’re doing what they can to reduce costs,” Flint said.

That includes deferring capital expenses, freezing hiring, offering unpaid leave, and cutting flights. Deciding which flights to cut comes down to economics, explained Samuel Engel, who leads the aviation group at the consulting firm ICF. “Fundamentally, it has to do with the revenue that comes in from those passengers.”

Corporate tickets, in business class, have higher profit margins than tourist economy fares. But as companies tell staff to limit travel, those dollars are drying up. Airlines will focus on cutting routes that affect the fewest people, like between two cities where there are multiple flights a day. One could be cancelled, and the passengers re-booked onto empty seats on the others.

It’s not always that simple, though.

Airline schedules are a byzantine network of interconnected flights, each feeding the next with passengers, baggage, and cargo. Cancel one, and it’ll have onward impacts, which airlines have to consider when choosing what to cut.

“The network devolves in the same way it evolves,” said Robert Mann, an airline industry analyst. “As you pare away the international capacity you have to pare away domestic capacity at some direct correlation.”

Both domestic and international carriers are waiving change fees for people who book flights, and later need to shift them.

“That is a very good lever to pull, frankly,” said Jonathan Root, who monitors airlines for Moody’s. “In my opinion it removes some of the risk of booking a ticket.”

That could keep ticket sales up, and bring in much needed cash.