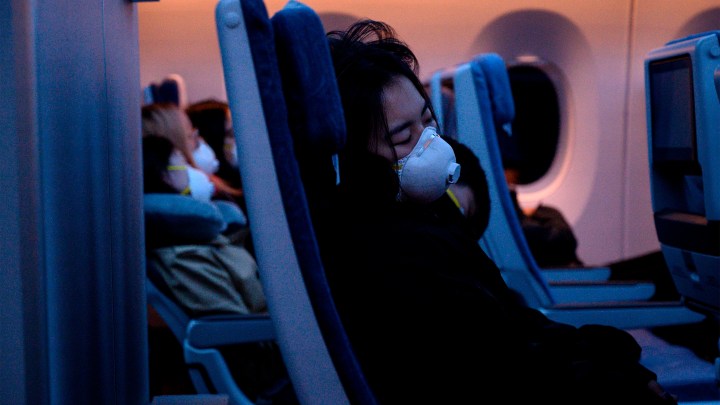 There aren’t many people flying in and out of China right now, and Dawna Rhoades at Embry-Riddle Aeronautical University said that means less capacity for crates and pallets, too:

“What most people probably don’t think about is a sizable portion of the air freight actually comes in the belly of an aircraft, so it’s in that section that most passengers think is where all their luggage is,” Rhoades said.

Depending on the plane, a flight can carry the equivalent of two semitrucks’ worth of cargo.

According to figures from the International Air Transport Association, cargo generates 9% of airline revenues globally — more than twice that of first-class tickets.

Jesse Cohen, an air cargo and freight transportation consultant, said for flights from China, that can sometimes be even higher.

“[On] a really good passenger flight, you might see 15% to 20% of the revenue on that flight being generated by cargo,” Cohen said.

Some of that money comes from businesses that sell perishable goods like food and flowers, which need rapid shipping.

But Cohen said high-value products, like laptops and cellphones, are also worth paying the extra to send by air so they’re not tied up at sea and can get to market quickly.

About one-third of air cargo is transported on passenger planes, and the rest goes on freight-only flights. They’re still flying to China. Neither FedEx nor UPS wanted to do an interview, but both said they’re following federal guidance and they’re giving advice to crews on how to stay safe.

And there is one type of shipment that hasn’t seen a downturn, said Eric Kulisch, the air cargo editor at FreightWaves.

“You’re seeing medical supplies going in, whether it’s masks, gowns, relief supplies,” Kulisch said, adding that the economic effects of the flight suspensions are not as bad as they might have been. It’s after the busy holiday shopping season in the United States, and the Chinese New Year holiday means factory output would have been lower now anyway, reducing demand for shipping of all types.