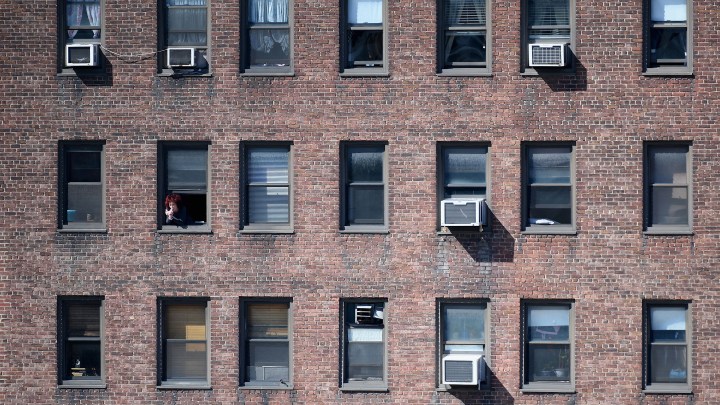 COPY
How can you shelter in place if you can't afford to pay for your shelter? Above, a person gets some fresh air by sticking their head out their window in New York City on March 24. Angela Weiss/AFP via Getty Images
COVID-19

How can you shelter in place if you can't afford to pay for your shelter? Above, a person gets some fresh air by sticking their head out their window in New York City on March 24. Angela Weiss/AFP via Getty Images
Listen Now

People don’t want a stranger in their house right now, nor does Chicago-based real estate photographer Norma Rios want to put herself at risk.

Which means she doesn’t have money coming in. She’s filed for unemployment, but credit card bills are due today.

For many Americans, the first of the month has loomed in a way it hasn’t before. Rent, credit card, mortgage payments are all typically due right now and the Treasury Department’s aid checks won’t be ready for weeks.

“I called the credit card companies and they all said I could delay payments. There won’t be any late fees, but the interest will continue to accrue,” Rios said.

The pressure is weighing heavily on her. “My heart’s beating really fast. I’m anxious. No interest would help me out for the next year. I would still be able to make my payments. But the interest accruing is going to kill me if I don’t make them regularly. And I don’t know where my income is coming from.” She says she’d like the government to step in. “It sounds like the banks are going to get the help that they need. But what about the rest of us?”

Jack Gillis, executive director at the Consumer Federation of America, said some lenders won’t charge interest this month but “each of the credit card companies are handling this in a different way, so it’s important to check in with the company, let them know you want to make the payments, but you are simply not able to.”

Figure out what bills won’t be forgiven and tackle those first, Gillis added.

Chris Dancy is a health consultant in Texas who makes most of his income between February and April. He’s had no jobs this season. He says he can cover his mortgage this month, but maybe not for much longer. He tried to call his bank, but there was a 20-hour wait time.

“It would be foolish to continue to pay a mortgage in a time when there is no real visibility into how this plays out post-June,” he said.

New York Governor Andrew Cuomo ordered a 90-day freeze on all evictions. But if renters can’t pay now, it’s possible they just get kicked out in a few months, according to Cea Weaver with the nonprofit Housing Justice For All.

“We are calling for a universal forgiveness for all rent and mortgages that are owed during this period of COVID-19,” Weaver said. “We think it has to be universal because the people who this crisis has hurt the most [are] the people who work in the cash economy, or the informal economy, or precarious employment. Like working as bartenders, or serving as restaurants. For folks like that, it’s going to be really hard to prove your income.”

Weaver said it would not be without precedent: Italy is suspending mortgage payments. In the era of shelter in place, she said, the government needs to make sure people can hold on to their shelter.