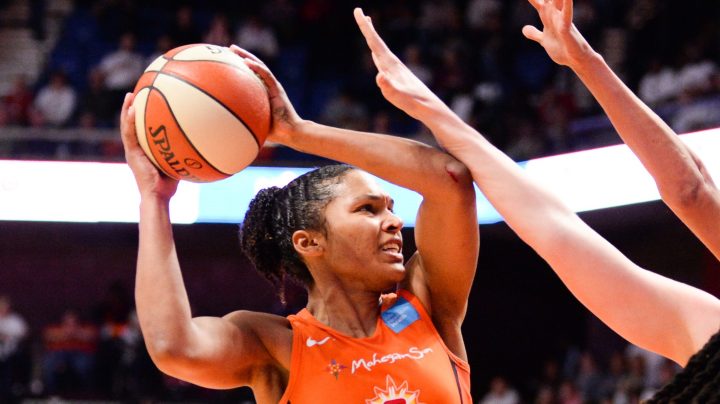 COPY
Alyssa Thomas of the Connecticut Sun plays in Game 3 of the WNBA finals in 2019. Kathryn Riley/Getty Images

Alyssa Thomas of the Connecticut Sun plays in Game 3 of the WNBA finals in 2019. Kathryn Riley/Getty Images
Listen Now

The collective bargaining agreement struck between the WNBA and its players could help narrow the pay gap in professional basketball at a time when many professional sports leagues have come under fire for persistent pay disparities between men and women athletes.

If ratified, the eight-year deal would provide benefits like maternity leave and would increase the average WNBA player’s cash compensation to six figures for the first time in the league’s history. The pay ceiling for top players would triple to more than $500,000 — which is still significantly less than NBA players (the minimum salary for NBA rookies during the 2019-2020 season is $898,000). It’s also less than what WBNA players could make playing overseas, something many do to supplement their income in the offseason.

“The women were not expecting the 90-plus-million-dollar salaries annually that players like LeBron James can command,” said Jessop, who has written about the deal for The Washington Post and The Athletic.

What they did want, Jessop said, was for the WNBA to invest in the kind of marketing that might help players bring in a larger audience for their games. As part of the deal, the NBA (the WNBA’s parent company) will ramp up marketing for the women’s league.

Boosting ticket sales and television viewership for women’s sports is important because historically, smaller audiences for women’s games have been used to justify lower salaries for the athletes. According to Jessop, that reasoning is valid — to a point.

“In order to make money, you have to spend money,” Jessop said. “When the NBA began, its seats were not filled. It was not driving millions of viewers. The difference is more money was spent to build that league.”

The deal has energized the push for fairer pay in professional sports and might encourage women playing in other leagues to ask for raises.

“What I love about this new WNBA collective bargaining agreement is that they basically laid out a master course of how to get more money,” said Jessop.