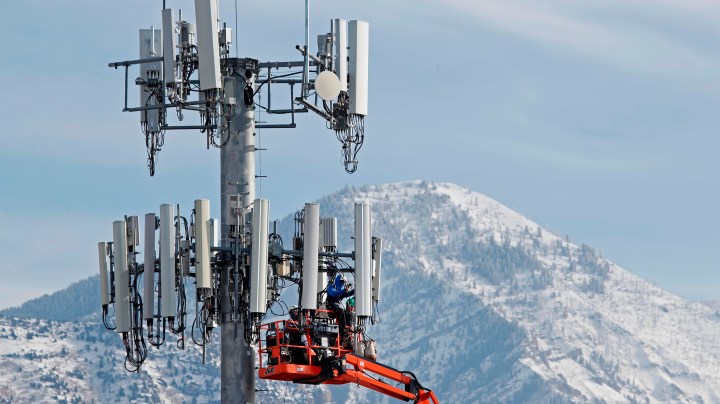 COPY
A crew for Verizon works on a cell tower to update it to handle the new 5G network in Orem, Utah on December 10, 2019. George Frey/AFP via Getty Images

A crew for Verizon works on a cell tower to update it to handle the new 5G network in Orem, Utah on December 10, 2019. George Frey/AFP via Getty Images
Listen Now

There is a race to make 5G technology mainstream in the U.S. Last month, T-Mobile launched its own nationwide 5G network. And last week, Verizon announced it wants to quadruple its output of 5G devices in 2020, though it’s delaying the launch of its in-home 5G service.

While we hear 5G talked about a lot in the news, telecom companies aren’t all referring to the same thing. Turns out, there are very different types of 5G out there.

The differences between 5G networks mostly revolve around speed and range. And there can be a trade off between how fast people can download things and whether coverage can reach people in remote areas.

T-Mobile and AT&T operate low-band 5G networks. Frank Gillett, vice president and principal analyst at Forrester Research, said those aren’t the fastest, but can transmit data over long distances. And installation can piggyback on existing infrastructure.

“So all the carrier has to do is upgrade equipment on their towers,” Gillett said.

The fastest 5G is known as high-band. We’re talking download-a-movie-in-a-few-seconds fast. But high-band 5G has a smaller range and requires new towers. And another major downside is that “it literally can’t go through walls,” Gillett said.

There is a mid-band 5G. It’s not extremely fast, but with a broader reach, according to Brent Skorup, a senior research fellow at the Mercatus Center at George Mason University.

“It’s kind of the Goldilocks spectrum,” Skorup said. “It’s the nice blend of capacity plus range.”

Verizon and AT&T have been rolling out the speedy, high-band coverage. But devices and applications will have to catch up for high-band to take off nationwide.