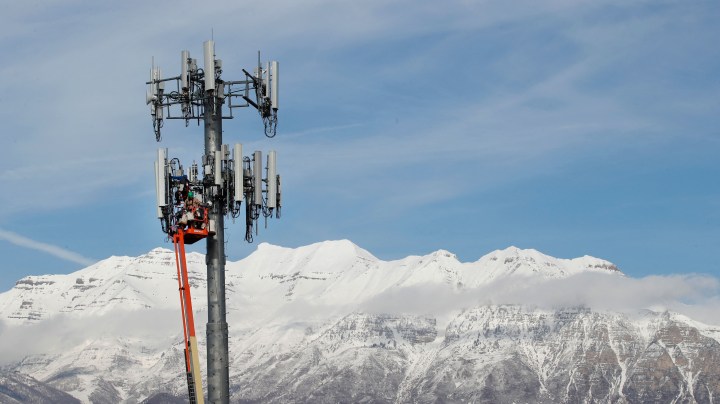 COPY
A contract crew for Verizon updates a cell tower to handle the 5G network in Orem, Utah in 2019. George Frey/AFP via Getty Images

A contract crew for Verizon updates a cell tower to handle the 5G network in Orem, Utah in 2019. George Frey/AFP via Getty Images
Listen Now

Tensions are high between two major American industries right now: aviation and telecom. At issue is whether 5G, the much-hyped wireless network with faster download speeds, could mess up safety equipment on planes and helicopters.

AT&T and Verizon were set to turn on expanded 5G services next month — until a last-minute warning from the FAA postponed the launch.

Obviously, 5G is already out there on our airwaves. Part of the reason the reviews so far have been kind of … meh, though? Big telecom has been waiting to activate a specific range of 5G frequencies — something called the C-band.

“And it fills a very important gap for the wireless companies,” said Jon Metzler, who researches the telecom industry at UC Berkeley. “You’ve got kind of the Goldilocks of spectrum: This one is a very wide area, this is a very narrow area, this one’s just right.

AT&T and Verizon spent more than $68 billion to buy rights to the C-band at an FCC auction last year. That’s just the tip of their investment.

“Hundreds of millions of subscribers at stake, and further tens of billions of dollars that have been invested in network equipment,” Metzler said.

But switching on that C-Band could maybe, theoretically, potentially mess up altimeters — a pretty important piece of aviation equipment.

“It is used to help the airplanes land safely when you have low visibility conditions. IT is also used in the collision avoidance system,” said Hassan Shahidi, president of the Flight Safety Foundation.

Still, many say the threats are largely theoretical. “The 5G spectrum is authorized for use around the world. And we haven’t seen great difficulties,” said Tom Wheeler, who chaired the FCC under President Obama.

A major question, Wheeler said, is who should pay for updating older altimeters, which could be more vulnerable. Maybe.