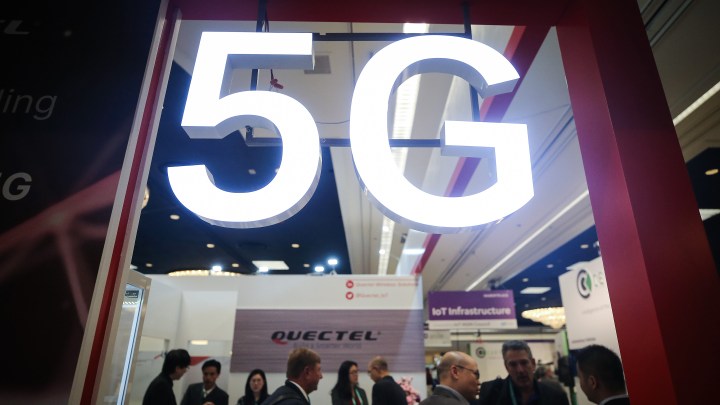 A lot of uncertainty surrounds the 5G future of mobile technology — there’s no certain killer app yet — but the wireless and media behemoths wanting a piece of the action are paying top dollar to own the wireless airwaves to deliver 5G services.

As of Jan. 5, the Federal Communications Commission auction of so-called mid-band frequencies has raised more than $78 billion, far exceeding any previous spectrum auction and blowing away most analysts’ expectations.

The auction is anonymous, so the identity of the bidders will not be made public until the auction ends. The event ends when bids stop coming in.

What’s on the block is the wireless version of beachfront property. Mid-band frequencies are often described as the Goldilocks range of the spectrum, where 5G signals fly fast and far.

“There is a broad sense that if you miss this opportunity, you risk missing out on the entire 5G revolution,” analyst Craig Moffett of the firm MoffettNathanson said. “And that could mean your company is largely irrelevant. It’s either play or die.”

Most media and wireless behemoths — including Verizon, T-Mobile, AT&T, Dish Network and Comcast — are betting on 5G to deliver next-generation phones, apps, entertainment and driverless vehicles. But right now, only T-Mobile owns a large chunk of mid-band spectrum.

Moffett expects that T-Mobile has been raising its auction paddle lately.

“They may have successfully raised the price for everyone else, but not have spent that much money themselves,” Moffett said. “If that’s true, they could come out of this in a very good position.”

A pricey auction could backfire on the industry. Here’s one way to look at it: If, say, property developers overpay for land, they’d have less money to build. And might have to slow down their projects. Same idea here. The 5G rollout could be delayed.

“If Verizon or AT&T wakes up and discovers that they’ve had to pay twice what they had budgeted for spectrum, that could affect how they deploy their networks,” Will Townsend, analyst at Moor Insights & Strategy, said.

A delayed buildout could make the U.S. tardy to the global 5G game, compared to competitors like China.

And then there’s the question of cost. The mobile companies paying top dollar to the FCC for spectrum have to make it back somewhere.

“The FCC is very proud of the fact they’re setting records and filling the government coffers,” Townsend said. “But that cost will get passed on to consumers.”