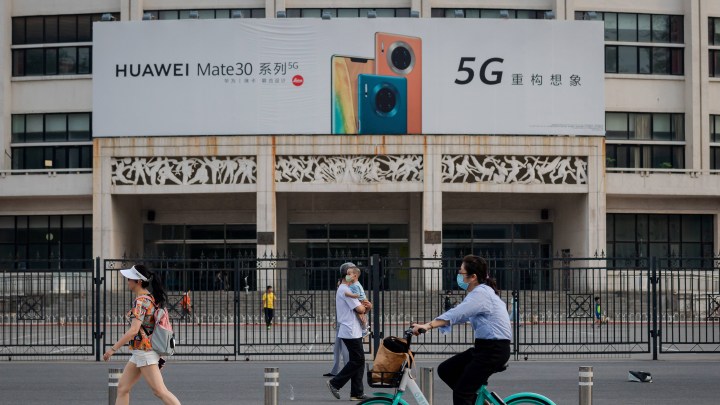 Chinese users will account for 7 out of every 10 5G connections in the world, according to the GSM Association, the mobile industry’s main trade association.

A lot of Americans have seen ads from wireless carriers proclaiming that the super-fast 5G network future has arrived, one with next-generation speed and data bandwidth allowing users to, say, download a movie in less than 10 seconds.

So here’s your reality check.

Compared to the rest of the world, the U.S. ranks dead last in 5G speeds in a study by Opensignal.

In the meantime, the world leader in 5G infrastructure investment is, yes, China. Despite the pandemic and global economic slowdown, its telecommunications carriers are on track by year’s end to install 600,000 5G signal transmitters, known as base stations.

For years, building out 5G has been a priority of the Chinese government, which can direct investment decisions in key sectors.

During the pandemic, in fact, the priority of 5G became elevated, as 5G wireless uses helped the country fight the COVID-19 pandemic, Earl Lum, founder of the research firm EJL Wireless Research, said. For instance: contact tracing, which requires tracking every phone in a dense place.

“One of the issues with current 4G technology is that there is a limit as to the numbers of sensors you can have in a specific area,” Lum said, whereas 5G lets contract tracers monitor “essentially hundreds of thousands of millions of devices that could be supported in every what we call a cell.”

Of course, ultrafast wireless isn’t just for medicine. A game-changing app for consumers may follow some day, and Beijing is betting that it evolves out of a Chinese ecosystem.

“The fear that I think every government in the world has is, ‘If we get beaten to the punch, is that other country going to discover the next Uber and drive significant GDP?’” Will Townsend, wireless analyst at Moor Insights & Strategy, said.

For now, though, it appears early for consumer uses of 5G, even in China, where 5G phones may not yet be in huge demand.

“I think the color of the phone is more important than 4G or 5G,” said David Li, executive director of the Open Innovation Lab in Shenzhen. Shenzhen is a chief tech hub of 12 million people, and the first Chinese city to be fully 5G enabled.

Li said there’s no guarantee the first consumer killer app for 5G will come from China, but he does predict Chinese consumers will be the first in the world to buy 5G phones en masse. Not because they need the devices, but because the devices will soon be dirt cheap.

There is one big wildcard in all of this: Huawei. The controversial Chinese telecom behemoth makes equipment for the country’s 5G network, including base stations, but the Trump administration considers Huawei a security threat and is blocking the company from buying critical semiconductors made with American machines or technologies.

“Huawei has been public that this is hurting sales, the bottom line,” said Townsend of Moor Insights & Strategy. “Huawei may have to make some tough decisions.”

“They’ve been cut off from their main manufacturer,” Paul Triolo, geo-technology analyst at the Eurasia Group consultancy, said. “So what they’ve done is to stockpile chips. So the question then is, how much have they stockpiled?”

A hobbled Huawei could slow China’s 5G march, given the company’s dependence on U.S. semiconductor know-how. In the long run, though, the sanctions may well cause Chinese chip firms to double down on domestic innovation.

“If they are backed into a corner, they are going to really double down on developing this, buying it, stealing it, however they can get their hands on it,” said Jeff Fieldhack, research director at the tech consultancy Counterpoint Research. “And it could really jump-start them. It’ll take some time, but in 10 years, 12 years, 15 years, a lot of this technology could be home grown in China.”