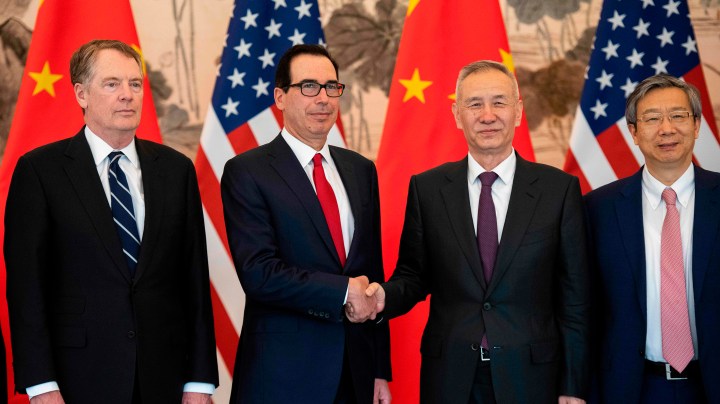 2019 has been quite a year for the country’s relationships with the rest of the world. We’ve been fighting over trade with — well, really, everyone: China, Europe, Mexico, Canada, the entire World Trade Organization. The United States has some new deals to show for it.

Here are the highlights from the year:

The trade war with China

Things heated up this year as the U.S. imposed tariffs on hundreds of billions of dollars’ worth of Chinese goods, and China responded in kind. There was a moment in May when a deal looked possible, only to evaporate.

“When that broke down, we got a lot more tariffs but also a lot more distrust between the two countries, and that was a pivotal moment between the two countries, and I’m not sure there’s ever a going back,” said Chad Bown, a senior fellow at the Peterson Institute. The year ended with a pause on the final round of U.S. tariffs set to go into effect Dec. 15, and a “phase one” preliminary deal with China. It’s yet to formally go into effect, and the details are scarce. So we’ll see if this is another fake out or the real deal in the coming months.

Crisis at the WTO

The U.S. has long been upset that the Appellate Body of the WTO — think of it as a supreme court for trade — has been trying to invalidate rights the U.S. said it never agreed to give up. The WTO has also been ill equipped to cope with complaints over China’s state-owned enterprises, which the government subsidizes, and which, in turn, indirectly subsidize the rest of the Chinese economy, to the dismay of Washington and manufacturers in the United States. The Trump administration’s approach has been to disable the WTO’s highest court by blocking new judges from being appointed. That’s resulted in paralysis — there’s no one to have a final say on decisions at the WTO.

“2019 will be viewed as the year in which the rules-based world trading system was most significantly undercut by the country that had been its principal proponent — the U.S.,” said Richard Weiner, a trade lawyer at Sidley Austin. A big question for 2020 is: What’s that going to mean for world trade?

A final United States-Mexico-Canada Agreement was negotiated and passed by the House of Representatives, replacing the North American Free Trade Agreement. There was some drama over whether U.S. attaches would be “inspecting” Mexican labor conditions, but the U.S. has assured Mexico that is not the case. The USMCA makes it harder to sneak in cheap parts from outside Canada, Mexico or the United States and requires a larger portion of cars to be made by workers who make at least $16 per hour. The deal is most likely going to be approved by the Senate and President Donald Trump.