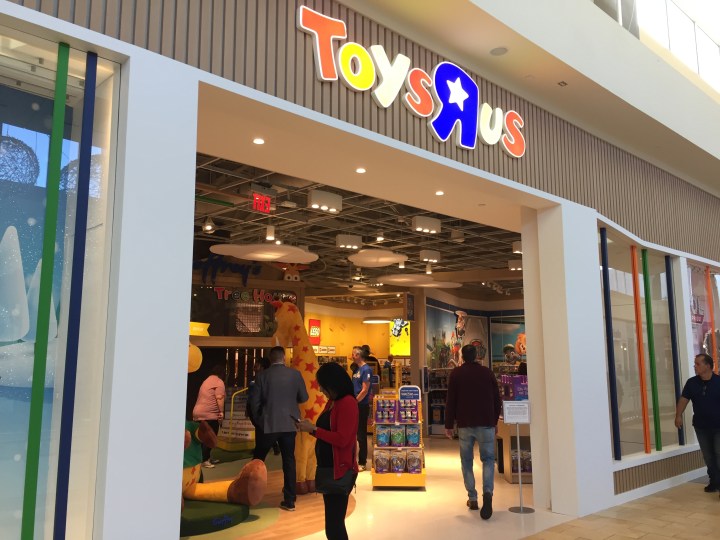 Toys R Us filed for bankruptcy in 2017 and closed its final stores last year. But the retailer is plotting a comeback, starting with two stores that focus on customer experience in order to compete with online and big-box retailers.

Tru Kids took over the Toys R Us brand in 2018 with a plan to do things a little differently. It has just opened one store in New Jersey and another in Houston’s Galleria Mall.

“Really what’s great about this store is the experience that it brings to kids, the fact that there are so many opportunities to have hands-on play,” said Tru Kids chief executive Richard Barry at the ribbon cutting for the Houston store.

The first thing customers see as they enter is a giant stuffed giraffe, the Toys R Us mascot, in front of a treehouse. The store also features a reading corner, a theater with hourly events and different spots to play with toys.

“I like that I could bring my girls in here and I could shop and they could play a little bit,” said Courtney Miculek, who lives just outside the Houston area. “They know if they’re actually going to like some of the toys I’m going to pick up for them, so that’s pretty cool.”

The store is much smaller than previous Toys R Us locations, but many more items can be ordered online. Shopper Sara Ahmed said she appreciates that.

Connie Porter, marketing professor at Rice University, said customers tend to remember who provided them with a good experience. “It doesn’t matter who made the toy. It’s who provided that space,” Porter said.

“Ultimately, products can be copied. Ultimately, people can try to copy even some of the services that you provide,” Porter said. “But if you can get deeper knowledge –– based on data, hopefully –– about your customers, you’re able to offer them an experience like no one else can.”

Toys R Us’s new strategy also involves moving into locations where there is already a lot of foot traffic. The company is looking at other malls throughout the country to open more stores.