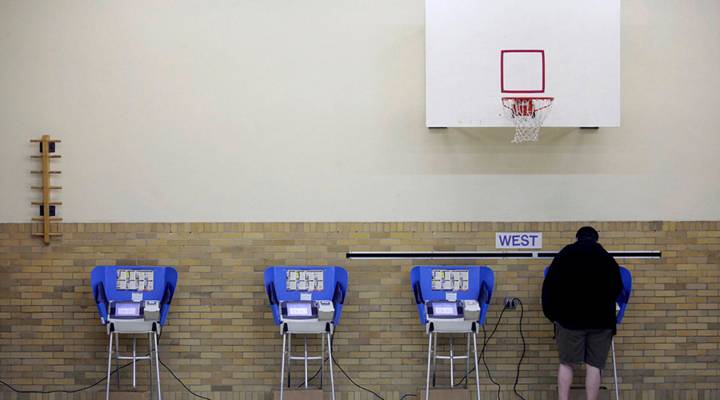 As presidential candidates vie for voters’ attention, there’s another group getting ready for 2020: state and local election officials.

Congress sent $380 million to states after attempts, some successful, to hack voter lists and election machines in the 2016 election. But elections security experts say that’s unlikely to be enough to fix the patchwork of voting machines, voter lists, and state or county computer systems that make up America’s voting infrastructure.

Efforts to shore up that infrastructure happen in quiet offices like that of Chris Piper, commissioner for the Virginia Department of Elections.

“The irony of being an election official is that if you’ve done your job right, nobody notices,” he said. Virginia was among the states probed by foreign hackers in 2016, and Piper said the commonwealth is working to ensure that doesn’t happen again.

“Virginia was obviously one of the states that was scanned, but we were not breached,” Piper said. “We’ve taken an incredible number of steps to improve that security posture.”

Virginia received about $9 million from Congress to better safeguard elections, money it used to improve digital security around voting and to replace some outdated voting machines. The Virginia General Assembly is also spending about $1 million per year of the commonwealth’s own money to fund election security improvements.

Back in the early 2000s, the federal government gave states $650 million for election infrastructure improvements and encouraged them to invest in digital voting machines. But those machines turned out to be vulnerable to hacking and other problems. So now states are spending their own money to upgrade once again, this time to machines that can still read paper ballots. Those machines cost about $5,000 each. And Piper said they also need annual upkeep.

“These one time infusions of cash are certainly helpful, but this is a problem, election security machines, that [isn’t] going to go away with one infusion of cash,” he said.

Several advocacy groups are complaining that, for instance, in Georgia, updating voting systems will cost local governments tens of millions of dollars the state has not appropriated.

States also need to protect what’s still digital, from voter databases to the WiFi at the local board of elections office.

“You have counties or towns that are running elections that have no IT staff, no cyber security staff,” said Lawrence Norden, who runs the Election Reform Program at the Brennan Center for Justice. “That’s a vulnerability that extra money could help with.”

Norden said governments need to spend at least $2.2 billion more in the next few years to bring election infrastructure up to modern security standards.

There is some federal aid in the form of training and tech support from the National Guard and the Department of Homeland Security. But Susan Greenhalgh with the National Election Defense Coalition said even that help can only go so far.

“We have 50 states and we have over 8,000 individual election jurisdictions,” she said. “So if each of them come to the Department of Homeland Security … they can be overwhelmed pretty quickly.”

Election experts say if there is going to be more done on this before 2020, it pretty much has to happen now. Some members of Congress want to include more funding for election security in the next federal spending bill, due on Dec. 20.