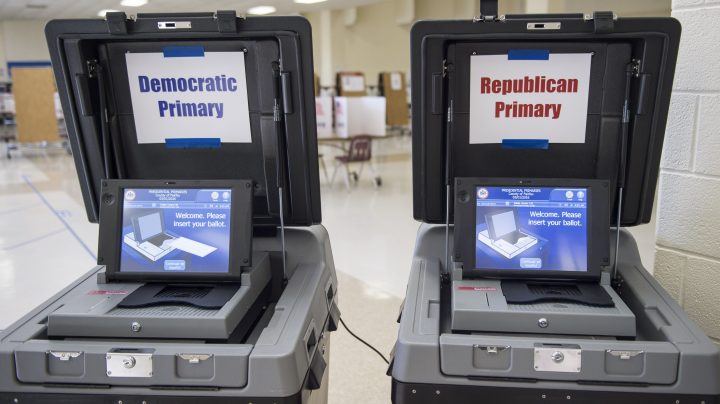 Gary Scott can tell you a lot about the internet. Or rather, how little of it his machines are connected to.

“There’s always some barrier between these machines and any online systems,” said Scott, the general registrar and director of elections for Fairfax County, Virginia.

Standing next to one of several DS200 voting machines set up for training purposes in the Office of Elections in Fairfax County, he emphasized that none of the fleet of voting machines he oversees have ever been connected to the internet. Neither have any of the computers used to program them, nor the machines that will receive the final vote count. The most surprising piece of technology involved in Fairfax’s voting approach might well be the oldest one: paper.

“We got a lot of resistance from the public because they wanted to know why we were going ‘backwards’ to paper, but it’s a much more secure method of doing it,” Scott said.

Fairfax County initiated a move toward paper ballots years before Virginia decertified paperless voting machines across the state, aligning with the latest shifts in thinking about election security—both in the U.S. and abroad.

The embrace of paper by districts like Fairfax marks a change in the nationwide trend toward electronic voting infrastructure that can be traced back to the Help America Vote Act of 2002.

On the heels of confusion over the “chad” — the precise portion of the ballot paper voters were to punch out — and the Florida recount in the 2000 presidential election, the Help America Vote Act was written “to provide funds to States to replace punch card voting systems,” as well as create the Election Assistance Commission and establish nationwide election administration standards.

“Unfortunately, since the Help America Vote Act was passed after the 2000 election, much of the security of voting machines has actually gotten worse,” he said.

“It’s particularly hard to build reliable software that can withstand malicious actors trying to tamper with it — and that’s precisely what a voting machine is. So there have been many concerns raised, and really every study of voting equipment that we use has borne these concerns out.”

The DS200 Scott demonstrated fits into a category of machines that Blaze said “can be made adequately secure” while complying with the Help America Vote Act. The voter fills out a paper ballot, which is inserted into the machine. Then the system runs the ballot through an optical scanner to review for errors. Once a paper ballot is successfully scanned and submitted, it drops into a locked bin within the machine as a secondary record of the vote. Blaze noted that retention of the ballot papers is a critical feature.

“The software might have errors in it, or it might be vulnerable to malicious tampering. But we still have the original paper ballots that were marked by the voter. So a human being can go back and look at the paper ballots and figure out whether or not the outcome of the election was reported correctly,” he said.

In Fairfax, Scott and his team are prepared for even lower-tech scenarios. He pointed out that the DS200 has a slot on the side to manually drop the ballot if the scanner is malfunctioning. If all else fails, the black suitcase-like kits assigned to each of Fairfax’s 243 voting precincts have been customized to include slots to insert paper ballots manually — just like an old-fashioned ballot box.

Scott’s counterparts nationwide are likely thinking similarly as they look ahead to voting security in 2020. As of writing, 14 states have not fully replaced their paperless voting machines.