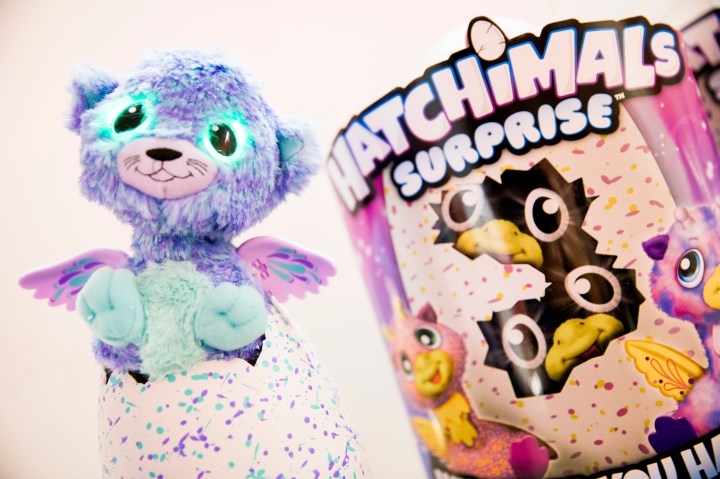 Six-year-old Eleanor Workman got a gift recently. It was a mini Hatchimal, a toy shaped like an egg that costs about $4. You crack it open and there’s a little plastic figurine inside. She remembers holding the egg in her hands, wondering what was in there.

“I imagined there would be a whale or a tiger,” she said. “And I got one of them right.”

It was a purple tiger, and she named it Hot Chocolate. (Some of the Hatchimals are scented; this one was said to smell like hot chocolate.)

“When I don’t know what I’m gonna get, it just pops out of nowhere when I get it,” she said. The whole point of this toy is the element of surprise.

Walk into a toy store this holiday season and you’ll see entire shelves of toys that include a big reveal.

There’s even the Poopsie Cutie Tooties Surprise, a glittery plastic poop emoji that conceals a collectible mystery character and a pile of slime.

And there’s Blume, a “magical flowerpot” made by Skyrocket Toys. When you sprinkle water on it, a doll bursts out of the top. It costs about $10.

Lindsey Scheftic, vice president of marketing at Skyrocket, has a theory about why surprise toys are so popular.

“When you become an adult and you get older, surprises are bad,” she said. “You don’t want to be surprised, because they’re usually not good. But for kids, who haven’t lived through that yet, surprises are still fun.”

Scheftic said the trend has also been fueled by “unboxing” videos on YouTube. Kids get a thrill out of watching other kids open toys.

After videos like this one started getting millions of views, the toy industry pounced, creating a host of toys with built-in suspense.

Here’s the thing, though: after the surprise, kids tend to lose interest in these toys. They move on to the next one, leaving pieces of plastic egg scattered around the house.

“It may be more about the acquiring than the having,” said Dr. Michael Rich, director of the Center on Media and Child Health at Boston Children’s Hospital.

One hidden cost to cheap surprise toys is trash, he added.

“It’s a disposable economy, if you will, and when we have an island of plastic that’s larger than Texas in the middle of the Pacific, we are going to pay the price for this,” Rich said.

Eleanor Workman’s mom, Meghan, is concerned about that too. Hot Chocolate, the purple tiger, has since gone missing. She’d rather not buy a replacement, but Eleanor really likes them.