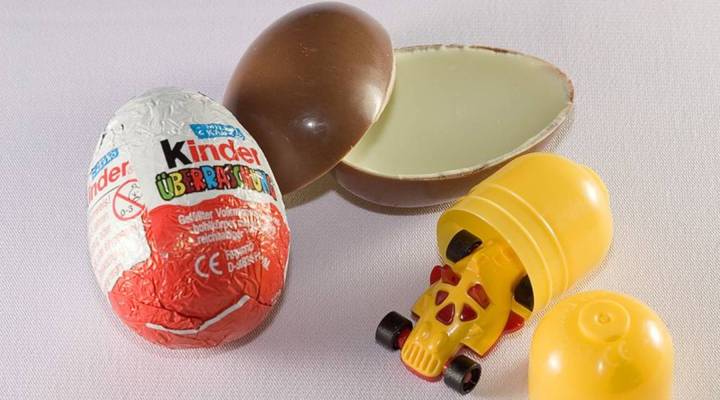 The original Kinder Egg packaging, pictured above, is banned in the U.S.   U.S. Customs and Border Protection
I've Always Wondered ...

The original Kinder Egg packaging, pictured above, is banned in the U.S.   U.S. Customs and Border Protection

Why are Kinder Eggs banned from import in the U.S. but there are other toy-in-chocolate products for sale that appear to be indistinguishable from the Kinder version?

Update: Ferreo announced it will start selling Kinder Eggs in the U.S. in 2018. The treat will be sold as two separately sealed halves — one will contain chocolate and the other will contain a toy.

We’re tackling this question just in time for Easter, when chocolate eggs are in stores.

Kinder Eggs are hollow chocolate eggs produced by Ferrero, an Italian company. Inside of the chocolate treat is a plastic capsule that typically contains a small toy. Kinder Eggs — or Kinder Surprise, as they are officially called — are popular in Europe but are banned in the U.S.

In fact, any candy with a toy or “non-nutritive object embedded” inside it has been illegal since 1938, when the U.S. passed the Food, Drug, and Cosmetic Act.

While there are some stores in New York where you can still find Kinder Eggs for sale, the Food and Drug Administration is pretty serious about the ban. In 2012, just before Easter, U.S. Customs and Border Protection issued a press release reminding people that Kinder Surprise eggs were illegal in the U.S.

“Also known as Kinder Eggs, these chocolate treats may be cute and seasonal but they are too dangerous to children to be imported legally into the U.S.,” read the press release. “The problem is the small plastic toy inside the Kinder Egg. While sold in many countries, this product is banned from the U.S. because young children can choke on it.”

The FDA’s concerns haven’t stopped people from smuggling these treats into the country.

In 2011, more than 60,000 Kinder Eggs were seized at the border, up from 25,000 eggs seized the year before, according to the CBP. They were mostly found in packages mailed from overseas or in people’s baggage.

Just a couple of months after the CBP issued its 2012 press release warning people about Kinder Eggs, two Seattle men, Brandon Loo and Christopher Sweeney, were stopped at the Canadian border where customs officers found six Kinder Eggs in their car. They got off with a warning but were told that the fine for smuggling in Kinder Eggs was $2,500 an egg.

So if all chocolate eggs with toys inside are illegal, what were these other Kinder-like eggs our listener Elizabeth found?

She said a local store recently sold “Frozen”-themed chocolate eggs, each of which contained one of the animated film’s characters inside.

“This may seem like a silly ‘I’ve Always Wondered’ question, but having been an ex-pat for several years and while visiting my parents when they were living overseas, Kinder Eggs were always a fun treat for us,” Elizabeth told Marketplace. “My son grew to enjoy them as well when we visited my parents.”

Turns out, the treats that Elizabeth spotted at her local store are also banned. These eggs are produced by Zaini, an Italian chocolate company.

The FDA told Marketplace that an import alert regarding the “Frozen”-themed chocolate eggs was issued in November 2015, and any sold in the U.S. are illegal.

More than 60,000 Kinder Eggs were seized from travelers’ baggage and from international mail shipments in 2011.

The spokesman for the agency noted that the FDA often relies on information from the public to determine if laws are being broken. Tips can be submitted to the FDA by calling 1-888-SAFEFOOD (1-888-723-3366).

The FDA’s rule was challenged by Nestle, a Swiss company, in 1997 when it introduced Nestle Magic Balls. The balls consisted of a toy inside a plastic shell inside a chocolate shell, the same as Kinder Eggs. This did not sit well with the FDA, which declared that selling Nestle Magic Balls violated the 1938 act. Nestle then tried to lobby the U.S. government with no success. Within two months of first being sold, the candy was pulled from the stores. A couple of years later, Nestle rolled out a tweaked version of the balls called Nestle Wonder Balls. Except this time, the chocolate shells were filled with candy, making it legal.

There are exceptions to the rule — well, kind of. Take Cracker Jacks, for example. It’s a food and there are toys inside the boxes. The difference is that the toy is not inside the food but next to it in the packaging. So it’s OK if toys and food mingle, but not if the toy is inside the food.

Nestle Crunch bars may soon be a thing of the past