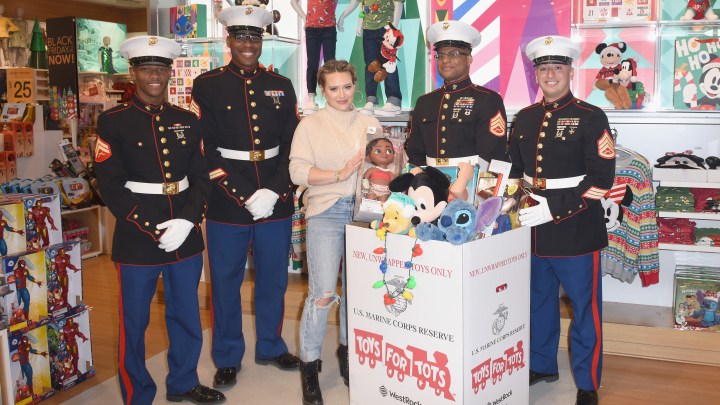 The holidays are all about giving and receiving. For millions of kids, the receiving is made possible by toy drives that shift into gear all over the country around this time. But like just about everything else, toy drives are operating a little differently this year because of the pandemic.

At Coalition for the Homeless in New York City, Elizabeth Morales, the organization’s community outreach coordinator, stands in front of a mountain of cardboard boxes. She opens them one at a time, stacking up Legos, jewelry-making kits and LOL Surprise Dolls that come with mystery accessories. Normally, teams of volunteers would be tackling the pile. But social distancing means only four people can be in the room at a time.

Last year, the Coalition distributed 12,000 toys. This year, there are only enough “elves” to process around 7,000. And they’re all coming from online donations. All those unwrapped toys typically collected at office buildings throughout the city? They’re not safe during a pandemic; also, many offices are still pretty deserted.

“It really wasn’t a matter of are we going to get enough toys,” said Sarah Murphy, the group’s director of development. “It was really a matter of how can we get enough people here to make sure we can do this safely?”

Even the mother of all toy drives, Toys for Tots, is dealing with logistical hurdles. And it’s run by the Marines. Last year, the drive took in $160 million worth of individually donated toys.

“The meat and potatoes of the program is the community action part. You know, the community dropping one toy at a time in our toy collection bins,” said Ted Silvester, the foundation’s vice president of marketing and development.

With a lot fewer shoppers in stores, it’s been harder to collect toys.

“We do expect local toy drives to be significantly impacted, while simultaneously we are seeing a lot more requests from families more so now than in a normal year, because so many people are still laid off and furloughed from their employment,” Silvester said.

So this year, Toys for Tots is looking to toy companies like Hasbro to donate toys and focusing on boosting cash donations from big corporations.

Smaller toy drives may not have an in with the Fortune 500. But they’re connected locally. Like Lisa Bonici, who runs the Richard Gardner Jr. Memorial Toy Drive, in memory of her brother. She’s been operating the drive out of her home in Staten Island, New York, for 26 years.

“You know what’s funny? Every year by this time, I have parties booked. Everything is already lined up and put on the calendar,” said Bonici.

But this year, people are overwhelmed and she’s having a hard time just getting them on the phone. And Bonici relies on local businesses for help. For instance, every year, she holds a toy drive happy hour at a local bar. “And normally we would bring in 100 people. We walk away with almost 200 toys that night,” she said.

With capacity restrictions and the city on the verge of new shutdowns, the event may not be possible. But Bonici has a bunch of toys left over from last year to get her started. And she’s determined to figure it out.