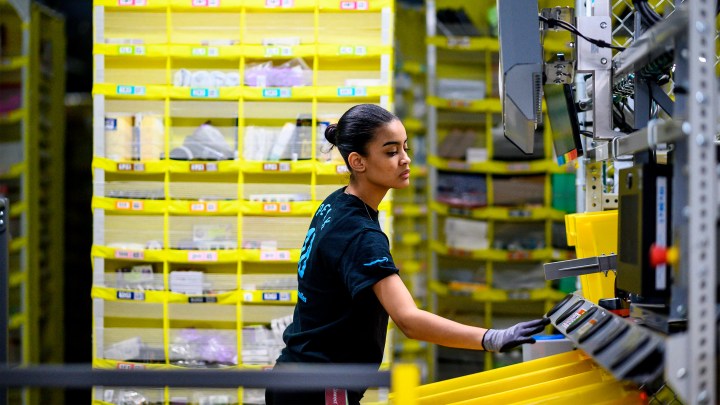 COPY
A woman works at a distribution station at an Amazon fulfillment center in Staten Island in February 2019. Johannes Eiselle/AFP via Getty Images
Workplace Culture

A woman works at a distribution station at an Amazon fulfillment center in Staten Island in February 2019. Johannes Eiselle/AFP via Getty Images
Listen Now

Cyber Monday — now that consumers are increasingly doing their online shopping throughout the holiday season — doesn’t mean quite what it did a few years ago.

On Black Friday, brick and mortar sales were down 6%, according to preliminary data from ShopperTrak. But online sales surged, hitting a record $7.4 billion, according to Adobe Analytics.

The ongoing shift to online shopping for the holidays is also changing the nature of seasonal work, as companies are increasingly hiring for new and different roles.

Pollak said seasonal retail postings on the site are down by a third from five years ago, while jobs in transportation and warehousing have made up the difference.

Target announced earlier this year it planned to double its holiday e-commerce hiring, and Macy’s expects roughly a third of its holiday jobs to be in e-commerce.

These new seasonal retail jobs seem to pay about the same as the old ones, but it’s hard to know for sure, said Beth Gutelius, who studies economic development at the University of Illinois at Chicago.

Many temporary logistics workers are hired through staffing firms, “which makes it really hard to get a very clear picture of wages and working conditions in that industry,” Gutelius said.

In October, there was a 17% dip in hiring in transportation and warehousing compared to last year. But that’s good news, according to Andrew Challenger of outplacement firm Challenger, Gray & Christmas.

“We really think that has more to say about the labor market than it does about retailers’ desire to hire,” Challenger said.

In other words, there aren’t enough workers looking for those holiday jobs.

Has e-commerce led to more shopping at work? Do you get your packages delivered to your office? Let us know here.