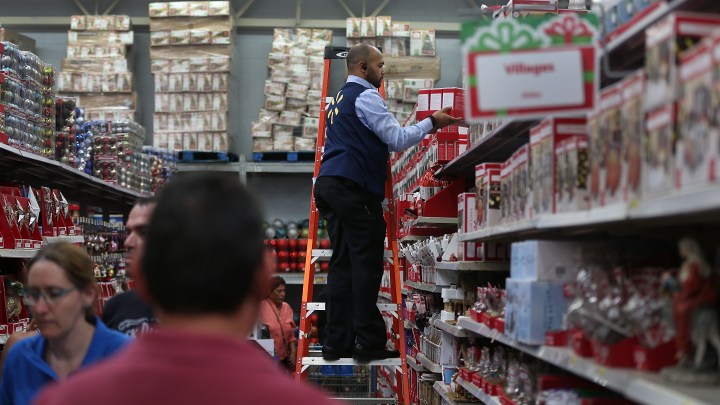 Walmart said it plans to hire 40,000 seasonal workers for the holidays this year. It brought on 150,000 in 2021. Joe Raedle/Getty Images
Listen Now

We’re just settling into fall, but many industries are already deep into planning for the winter. It’s around this time of year that companies start hiring seasonal workers. According to the National Retail Federation, the retail industry alone hires somewhere around 500,000 temporary workers for the holiday season.

But the numbers might be smaller this year. Walmart just announced it’s hiring 40,000 seasonal workers — down from 150,000 last year. Between an uncertain economy and a tight labor market, companies are unsure of how many workers to hire and how to even recruit them.

That hesitation has been reflected in the delay of announcements about hiring. September is when seasonal worker data often comes out, but there’s been little movement so far, per Andy Challenger at the outplacement firm Challenger, Gray & Christmas.

“We haven’t quite seen a lot of announcements yet because we’re just in a touch of an uncertain moment,” he said.

Right now, retailers feel a bit paralyzed. Consumer spending is strong, but companies aren’t sure that’ll hold through the holidays because inflation has been so sticky. And they’re worried that a recession is coming.

“They don’t want to get into a bidding war over talent heading into a crash, right? It’s looming a lot on their minds,” said Challenger.

The bidding war he referred to is the very tight labor market. Unemployment is at 3.7%, and hiring is especially competitive for consumer-facing businesses looking for hourly workers.

“I mean, in the hourly space, people aren’t just applying to our job, they’re applying to 10 jobs,” said Matthew Lavery, director of talent acquisition at UPS, which is hiring 100,000 seasonal workers this year with wages ranging from $16 to $30 an hour. “There’s competition, and I think in some cases they’re shopping.”

Speed is key to the strategy UPS is using to win workers. The company has slimmed its online hiring process down to 25 minutes — from application to job offer. Some 80% of its seasonal jobs won’t even require an interview.

“The quicker that we can get to a job offer to a candidate, the more likely they are to start with us,” Lavery said.

UPS has calculated that a shortened process makes candidates 50% more likely to accept an offer. That matters when it’s taking the company 15% longer to fill positions than in past years.

Michaels, the arts and crafts chain, is opting for a different strategy. It’s hiring 15,000 workers — 5,000 fewer than last year — and promising them more hours.

“It definitely helps us to hire fewer people,” said Mary Lynch, a regional director. “And it helps you to keep team members, right? They’re here to earn money. The more folks you hire, it spreads the hours out much thinner.”

It’s also an approach that could theoretically allow a company to downshift hours if sales don’t match expectations. Alan Benson, a labor professor at the University of Minnesota, said he thinks more companies will play it conservatively this year.

“They might try to keep a leaner ship and then try to make more adjustments on the fly, rather than overshoot, promise wage increases, promise big signing bonuses, and then fall short if indeed the holiday season isn’t as hot as they may hope,” he said.

For now, it’s a bit of a cat-and-mouse game. Companies might wait it out a bit longer and see how the economy goes before promising to hire. But if they wait too long, all the good workers might be snapped up.