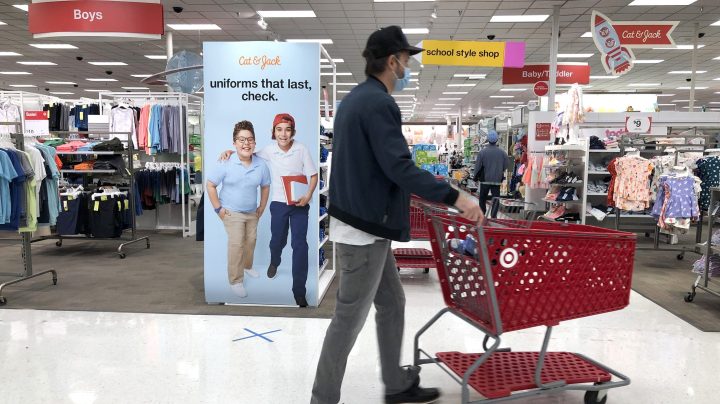 COPY
In August, retail sales rose by 0.3%. Some of that was likely due to consumers stocking up on back-to-school items. Justin Sullivan/Getty Images

In August, retail sales rose by 0.3%. Some of that was likely due to consumers stocking up on back-to-school items. Justin Sullivan/Getty Images
Listen Now

There continue to be a whole lot of mixed signals in this economy. Take today: We got retail sales numbers for August from the Census Bureau, and they were up, slightly — 0.3%.

Some analysts are saying, “Hey, look, this is good news. Even with such high inflation, consumers are still spending.” Others are looking at those same numbers and saying, “No, wait, I see warning signs.”

August is a time of transition, and that’s evident in what we as consumers bought last month.

“People were stocking up for back-to-school, and back-to-work,” said Bryan Eshelman at AlixPartners.

“People want to buy what they need for their children, for themselves,” Eshelman said.

And they did — school supplies, computers and smartphones, and clothes. Clothing sales were up 0.4% in August.

In addition to that (not school related) people also bought cars. Sales of those were up 2.8%.

And they spent a lot on food, said Sucharita Kodali at Forrester.

“Interestingly, consumers are actually spending more money eating out now than they are in grocery stores,” she said.

Kodali said there has been a notable change from earlier pandemic days.

“What we’re not seeing as much of is a lot of the furniture purchases that were really hot during the pandemic, where people were investing in their backyards or furniture to enhance their shelter-at-home experience.”

Furniture sales were down 1.3%.

But there are signs some people are starting to pull back on bigger purchases other than cars.

“Consumers are still buying items that they want, but they’re being a bit more cautious,” said Gregory Daco at EY-Parthenon. “They’re facing an environment where high prices are constraining their budgets. And they’re having to buy fewer items, but paying more for those items that they’re still buying.”

In terms of the August numbers, “we still have some positive tailwinds from spending on summer services, on travel and leisure, on accommodation,” he said.

But as the summer fades, Daco said some of that spending is likely to fade along with it.