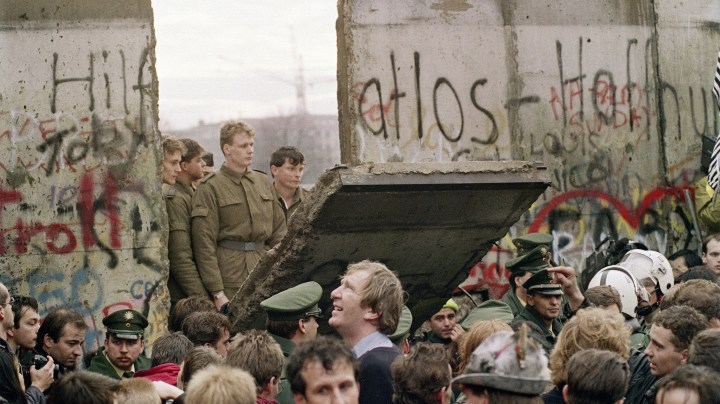 West Berliners crowd in front of the Berlin Wall early Nov. 11, 1989, as they watch East German border guards demolishing a section of the wall between East and West Berlin. Gerard Malie/AFP via Getty Images
Listen Now

On Nov. 9, 1989, in East Germany, Holger Wenschuh already had cause to celebrate. He was nearing the end of his post-grad chemistry studies at the Friedrich-Schiller University of Jena, and it was his 25th birthday. But before the day was out, Wenschuh would have another reason to party.

“I was in the basement of our dorm, celebrating my birthday with a couple of friends and somebody came in, shouting out: ‘You won’t believe it! The wall is gone. And people are dancing on the wall!'” Wenschuh said.

“This was it. We knew this was a big event. So the party went on until early in the morning.”

Film footage of people dancing and cheering on the Berlin Wall went around the world, along with another more sobering image: a long cavalcade of Trabants, the noisy and polluting East German car, snaking into West Berlin, belching plumes of acrid black smoke and heralding an historic exodus.

Hundreds of thousands of Easterners were to flee to the West, not only because of the political repression and human rights abuses they’d suffered under communist rule, but also because of dire economic conditions in the East.

The East German currency — the ostmark — was virtually worthless and the easterners demanded West German deutsche marks in exchange.

“The people in the East said: ‘If the West German mark doesn’t come to us, we will go to the West.’ And the people did,” said Hirte.

“Highways, railroads, sewage systems, public buildings were all in urgent need of repair, if not reconstruction,” said professor Reint Gropp, president of the Halle Institute for Economic Research.

“If you drove around East Germany just after the wall came down, it was frightening. The roads were at the same level as before the Second World War. In fact, you could still see war damage in many parts of East Germany. That’s damage that had gone unrepaired for more than 40 years,” Gropp said.

Since 1989, West German taxpayers have poured more than $2 trillion into the East, repairing the infrastructure, paying pensions and welfare and supporting new companies.

Wenschuh, the chemistry student who celebrated his 25th birthday the day the wall came down, has benefited from that massive infusion of cash. He is today the managing director of a drug firm, JPT Peptide Technologies in East Berlin, which has received government research grants and other forms of financial support to help the business get off the ground. The company now employs 110 people and, according to Wenschuh, is profitable. He is happy about the way reunification has gone.

“Yes, 100%,” Wenschuh said. “For me, personally, it’s gone very well. Carving out JPT as a company and growing the company … this would never have been possible in East Germany. We wouldn’t be where we are today without that help from the West.”

But he’s one of the winners. Many thousands of East Germans did not do so well out of reunification.

Do you have memories of the fall of the Berlin Wall and what the reunification of Germany meant for friends, family or a business? Share your stories and comments using the form below.