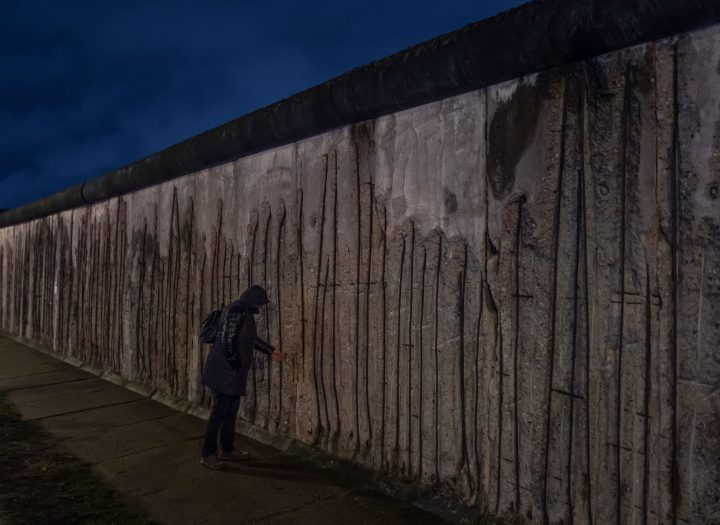 A person touches a segment of the Berlin wall at the Bernauerstrasse wall memorial on the 30th anniversary of the fall of the Berlin Wall, on November 9, 2019 in Berlin. John MacDougall/AFP via Getty Images
Listen Now

30 years after the fall of the Berlin Wall, how do we remember that event and Germany’s subsequent reunification? We asked you to write in. This story is the result of your contributions.

Kadidia Cooper was 10 years old when she heard that the Berlin Wall had fallen, but she didn’t think it would impact her life that much. She grew up in Greifswald, East Germany, but at the time she was living in Moscow where her parents had recently taken a work assignment.

They were supposed to be in Moscow for five years. But Cooper’s parents’ assignment was cut short when they learned that the state-owned telecommunications company where they worked as engineers, Nachrichtenelektronik Greifswald (NEG), would be taken over by the West German company Siemens — one of hundreds of public companies privatized during German reunification.

“At that point, I think we all started to realize that life was just going to be different,” said Cooper.

Within months of returning to Germany, both of Coopers’ parents lost their jobs. Siemens eventually shuttered the former NEG factory, which had been one of the main employers in town.

“It put half of an entire town out of work from one day to the next,” said Cooper.

Her mother was able to find work in real estate, in part due to money pouring in from the West to help modernize the East. But Cooper’s father was out of work for years. Even her sister, who graduated from high school in 2000, a decade after reunification efforts began, faced bitter employment prospects in the East.

“She didn’t have a job that lasted for more than a few months until she took all her children and moved to West Germany, because the area where I’m from just never recovered,” said Cooper, who moved to the United States when she was 19.

Many companies that had been owned by the communist German Democratic Republic struggled to survive in a reunified German economy. Cooper was told that inferior East German products were to blame for the mass business closures in her town.

In recent years, when Cooper visits Germany, she has started noticing those “inferior” products coming back in stores. Now they’re often marketed as luxury products — and they’ve become popular in West Germany.

“To me that’s just very ironic and funny in a sad kind of way,” she said.

“After all this time, I think it would have been better to just leave things be,” said Cooper. “Open up the borders, give people freedom, yes. But forcing a country to reunite? There were a lot of unintended consequences.”