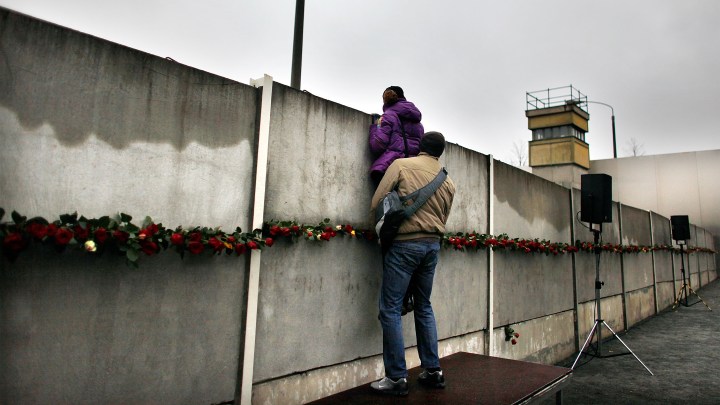 COPY
A couple attempts to peek through cracks in a still-existing section of the Berlin Wall into the so-called 'death strip,' where East German border guards had the order to shoot anyone attempting to flee into West Berlin. Carsten Koall/Getty Images
Fall of the Berlin Wall

A couple attempts to peek through cracks in a still-existing section of the Berlin Wall into the so-called 'death strip,' where East German border guards had the order to shoot anyone attempting to flee into West Berlin. Carsten Koall/Getty Images
Listen Now

After the Berlin Wall came down, 18 million people in East Germany were — for the first time in more than 40 years — able to travel as widely as they could afford; express political opinions without the fear of the secret police; and choose their government in democratic elections.

According to a recent opinion poll, however, just 38% of Easterners regard the reunification of Germany as a success.

The roots of this disaffection can be traced back to what happened in Germany’s eastern states in the years following the fall of the Wall.

“It was a big economic and cultural shock. Many people here in the east felt lost,” said tour guide Claudia Haley at the Schoneweide Industrial Museum in East Berlin.

“Under the GDR [the previous, communist German Democratic Republic] everyone had a job. You stayed in that job. You felt part of a group. And that’s what the older easterners who come here today tell us: ‘I miss the feeling of being in a group at work.’ They lost that feeling after the Wall came tumbling down,” Haley said.

Hundreds of state-owned companies were sold off to the private sector after reunification and many subsequently collapsed because they could not compete in a market economy with a much stronger currency. Many of the workers who lost their jobs felt they were the victims of the new, heartless, West German owners.

“The firm I worked for had a staff of 2,500,” said Dieter, a factory worker now in his 70s and retired. “The new owners just bulldozed the plant. Why? Because we were making the same sort of things that they were making in the West. They just wanted our contacts and order books. But as for the staff here … they didn’t give a damn about us.”

Mario Tiesies, who with his wife Petra runs Arche, a charity in the Eastern town of Stendal that supports children from disadvantaged families, has heard that complaint often.

“Lots of the parents who bring their children here lost out from reunification. Their parents never worked again. And they’ve never had a steady job,” Tiesies said.

“We all gained freedom when the wall came down, but lots of people here lost their economic security. There is a widespread feeling of distrust, a feeling that plenty of Westerners came here just to make easy money,” he said.

There is a general belief in the Eastern states that, over the past 30 years, Easterners have been treated as second-class citizens. Economist Jörg Roesler said that feeling has festered because Western companies were allowed to plunder their Eastern counterparts; he believes the West threw the East to the wolves.

“I’m deeply disappointed that they were not able to give the East a chance to reconstruct. That did not happen,” he said.

Western taxpayers may have poured $2 trillion into improving the infrastructure and the social safety net in the East but, according Roesler, a lot of that money was wasted. He said if Eastern companies had been protected against Western competition for up to five years, a whole generation would not have been thrown out of work and made to feel worthless.

“They could have been proud of a unified Germany,” he said.

The Eastern states are much better off than they were under communism and there are some individual corporate success stories. Take Little Red Riding Hood, a producer of sparkling wine which prospered in a unified Germany.

“Every second bottle of sparkling wine sold in this country today comes from our company,” said chairman Christof Queisser. He attributes the company’s success both to the excellence of its product and the tenacity of the managers who bought out the company after reunification, cut costs, shed labor and then, in buying up several western wine producers, pursued an aggressive expansion policy.

The main reason for the continuing under performance, according to the government minister for Eastern states, Christian Hirte, is the huge brain drain that has occurred over the last 30 years.

“The best and the most motivated and mobile people got up and went to the West and made their living there,” Hirte said. “You cannot repair such a brutal development in demography. It will be a problem for decades.”