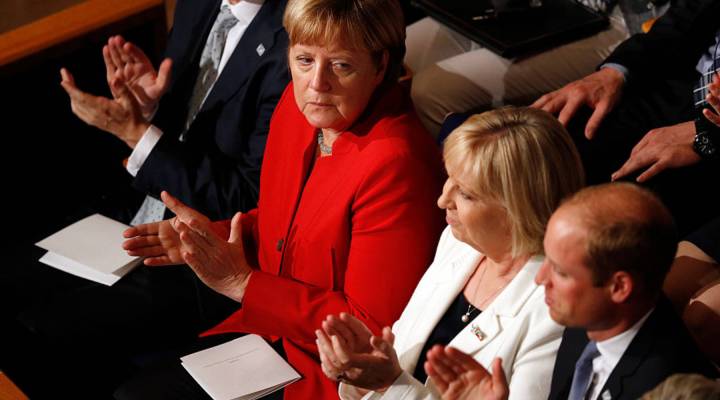 Germany, thanks in no small part to Chancellor Angela Merkel, has become a leader in Europe.

The county’s been at the heart of negotiations on Greece’s debt, the refugee crisis and now what to do about Brexit.

Just yesterday, Merkel set off on a weeklong Post-Brexit tour of Europe, where she’ll meet with leaders to discuss a plethora of policies.

Matthew Qvortrup is a Professor of Political Science at Coventry University in the U.K. His new book is called “Angela Merkel: Europe’s Most Influential Leader.” Qvortrup spoke with Marketplace’s Kai Ryssdal.

Her parents actually lived in West Germany, in Hamburg before. And then the Bishop of Hamburg said we need people to preach the Gospel in Communist East Germany. So the parents go the other way. So when over a million people are escaping East Germany, the traveled the other way, as it were, like refugees really … Then in her own life she grows up in the way of the Stalinist state in the way that most people do. [She] is very uninterested in politics, is a bar made… “Angeela” as she calls herself hasn’t got her doctorate after seven years when she’s living illegally in Berlin. But eventually she gets her doctorate and works as a quantum chemist at the Academy of Sciences in Berlin. And then the Wall comes down and the rest literally is history.

On her style as a politician:

…It’s interesting that every year in Germany they have the German word of the year, which is sort of the new word that has been created. And in 2015, the new German word was zu Merkeln or “to Merkel.: Which somebody who, sort of deliberates, considers and sometimes takes a long time to make a decision. But once the decision is made she takes it. And that’s been sort of like the pattern throughout her political life. Whenever there’s a crisis, she won’t necessarily just come out and make a statement on the day when it has happened.

On her developing relationship with British Prime Minister Theresa May:

I remember about ten years ago I was on a platform with Theresa May and Angela Merkel had not been in power for a long time. And she asked ‘Who is this German woman?’ And I said, “Well, she’s quite pragmatic, she’s quite tough, she’s not very flashy and she’s a Vicar’s daughter. And Theresa May then said to me, “She’s a bit like me then.” …And what was interesting about the press conference that Angela Merkel and Theresa May had was that after all the niceties and the “I’m sure we’re gonna get on we’re both Vicar’s daughters,” which Angela Merkel said, she also then said, “But by the way there will be no cherry picking.” You either have to accept the deal, you have to pay into the budget. So she’s going to be very nice but incredibly tough.