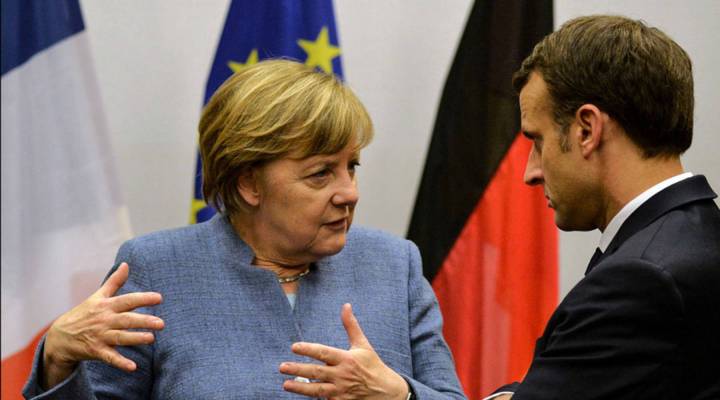 The country’s left-leaning Social Democratic Party, or SPD, has agreed to talk with Merkel’s conservative Christian Democratic Union about forming a coalition government or, at least, supporting Merkel’s party if it were to continue to govern as a minority party.

The SPD’s move surprised many. Ever since elections back in September, the SPD had ruled out such a possibility. Today’s decision by the SPD will please many Germans, who warm to Merkel’s measured, pragmatic style.

Among European Union politicians, Merkel’s critics say her dithering prolonged the bloc’s recent debt crisis and that her “open door” refugee policy imperiled the EU’s integrity. Supporters were delighted to see her political prospects improve. They say Merkel is one of the few national leaders able to help coax the fractious members of the European Union into a semblance of unity.

Merkel isn’t out of the woods yet. There’s still much to be hammered out between the SPD and CDU. The months of doubt over whether the chancellor could secure a political deal and stay in office have left some feeling that Merkel’s domestic political woes have hurt the EU as a whole.

“It’s not good for the EU,” declared Christian Sauer, a Berlin-based internet entrepreneur. “The union needs more political and economic integration between the member states, and it definitely doesn’t help when the biggest European country is at a standstill.”

Sauer is so worried about the growing disenchantment with the EU that he has helped launch a new website to promote the bloc as a haven of peace and prosperity. Jurgen Steitz, a co-founder of the site, agreed that Merkel’s domestic political difficulties pose a problem for the EU.

Merkel’s political vulnerability coincides with a call from the bloc’s second-most powerful politician for a radical overhaul of the EU. The dynamic young French President Emmanuel Macron, who was elected last May, has proposed much closer cooperation between the bloc’s member states. In order to protect the euro and stave off further crises, he’s suggested creating a eurozone finance ministry and a budget to serve the needs of all the 19 countries that use the single currency.

But that’s a highly contentious proposal. It’s widely seen as a call to pump more German cash into troubled countries like Greece, and the idea is very unpopular in Germany. John Springford of the Centre for European Reform said, given the political cloud still hanging over Merkel, she’s less likely to respond positively to Macron’s plan.

“If she doesn’t have a stable coalition, it would be very difficult for her to give Macron very much at all,” he said.

Macron can hardly press on with his proposed reforms without Merkel’s backing.

“Key issues such as reforming the eurozone to give its own budget or eurozone minister are basically impossible without German support,” observed Leopold Traugott, an analyst with the Open Europe think tank in London. “And Macron will not receive an answer from Berlin in the near term on his reform ideas.”

Traugott added, however: “Even if Germany had a stable government right now, it’s unlikely Macron would get everything he wants.”

Merkel’s political troubles could have another intriguing and indirect effect. This has to do with Brexit. Some German politicians believe Britain’s expected departure from the EU will be a disaster.

“It has become obvious that this is a lose-lose situation for Britain and Germany and the whole of Europe. The loss of such an important and sensible ally economically would be very damaging, and I think it is irresponsible not to try to stop it,” Henkel told Marketplace.

Henkel’s plan is for the European Union to bend over backward to persuade the Brits to stay in the bloc, offering them more control over their own affairs. But if Merkel does now enter a coalition with the SPD, that’s unlikely. The party is led by Martin Schulz, a committed EU supporter, who’s likely to insist on taking a very hard line with the Brits.

“Mr. Schulz is an absolute advocate of the United States of Europe. And I think if he plays a part in the next coalition, the German government will allow the European Commission to continue treating Britain with arrogance and make Brexit a certainty,” he said.

Merkel’s political challenges could lead to various negative outcomes for the EU: from paralysis and stagnation to the turmoil of a no-deal Brexit.