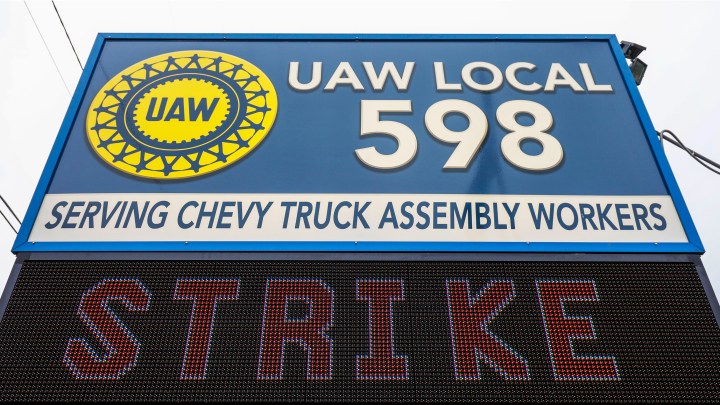 COPY
A sign in front of United Auto Workers Local 598 after the UAW declared a national strike against GM at midnight on Sept. 16, 2019 in Flint, Michigan. Bill Pugliano/Getty Images

A sign in front of United Auto Workers Local 598 after the UAW declared a national strike against GM at midnight on Sept. 16, 2019 in Flint, Michigan. Bill Pugliano/Getty Images
Listen Now

It’s the first nationwide GM strike in 12 years, and it is expected to immediately shut down the company’s operations.

Marketplace’s Kimberly Adams spoke about what led to the strike and what workers are demanding with Art Wheaton, union expert at Cornell University’s School of Industrial and Labor Relations. Below is an edited transcript of their conversation.

Kimberly Adams: So, can you give us a sense of the cost of this strike, both for GM and the workers?

Art Wheaton: Well, there have been estimates all over the map for how much it costs. It could be as much as $100 million a day for General Motors by shutting down the entire auto system in North America, because if they shut down the U.S., it will also impact both Canada and Mexico. So it’s a very significant event. For the UAW, instead of getting a lot more in their wages, they’re only going to get $250 per week. So it’s nowhere near what they’re needing to make to be able to pay their bills. So it costs the union money, and it definitely cost General Motors money.

Adams: And what are the sticking points in this negotiation right now?

Wheaton: There’s quite a few. One of the biggest ones is the UAW in the past agreed to have a multi-tiered wage system where the people that have been there a long time would get about $24 per hour in their base wage. New hires might get $17 an hour, but then they started hiring a lot of temporary workers, and they might get $15 an hour — all three workers doing the same job at the same time in the same place, getting three very different pay differences. And it’s not just the pay: there’s a huge difference in what the benefits package is for each of those tiers or each of those types workers. And from General Motors’ perspective, they say, “Our average pay rate is already higher than what they pay at Honda, Toyota, Nissan and the others. We think we pay plenty we don’t want to give you more.” And the major sticking point is the membership and the UAW tend to look back at what GM has done the last four years. GM has to look at their crystal ball and say, “What do we think we’re going to see in the next four years.” And I think the next four years are going to be less profitable than the last four years. So it makes it tougher for General Motors to give significant pay increases.