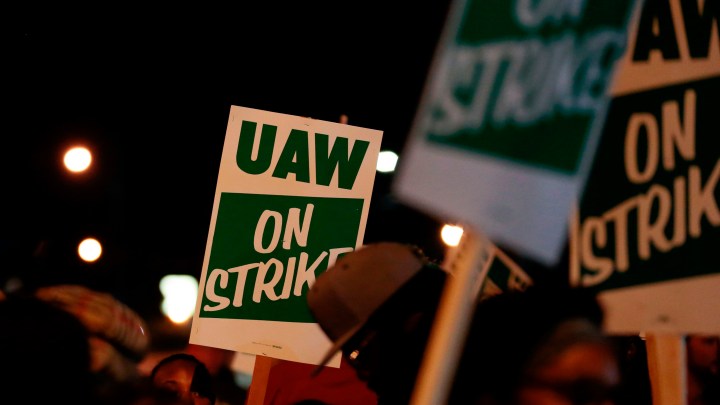 Roughly 46,000 General Motors employees went on strike from midnight last night, after talks between the automaker and the workers’ union, the UAW, failed to produce a new agreement by the time their contract expired over the weekend.

Louis Phipps Jr. says he logged 20,000 steps on the picket line this morning in front of GM’s idled transmission plant outside of Baltimore.

He’s one of only seven people still working there. He says that when he got a text message yesterday about the strike, he said: “Yeah, let’s do it.

“The people up there in them big offices, they’re getting their money. The CEOs, the vice presidents, and all them — they’re getting paid big dollars,” he said. “We down here, we’re getting little pennies compared to them.”

Like many GM workers, Phipps feels that GM’s employees helped get the company through the financial crisis, and now that the company’s doing better, believes workers should share in that success.

While he’s on strike, he and other UAW members will have to make do with just $250 a week from the union.

Mike Greason, who works at GM’s Toledo plant, says he always makes sure his finances are in order when the UAW contract comes up for renewal every four years.

“I give myself a year and a half to pay off all my bills,” he said. “I don’t want no bills when we go on strike.”

Greason’s wife also works for GM; both of them are taking the hit.

GM says it offered the UAW $7 billion in new investments as part of these negotiations, plus “solutions” for the plants in Ohio and Michigan that it’s idling, though it didn’t explain what those solutions would be.

“Obviously, I’m leery when they say they offer a ‘solution’,” said Dave Green, who was president of the UAW local in Lordstown, Ohio, until he transferred to GM’s Bedford, Indiana plant last month.

“I live in a new area now. Right? But I’m not going to buy a residency here until I understand what’s in this contract,” Green said.

No matter what happens, he says he’s now committed to Indiana. Any “solution” for his old plant in Lordstown will come too late for him.

Editor’s note: Tracey Samuelson’s recent series of reporting on General Motors workers covered retraining options for laid-off workers, the difficulty of moving away from plants that have been “unallocated” and the impact of auto plant closure in one part of Detroit.