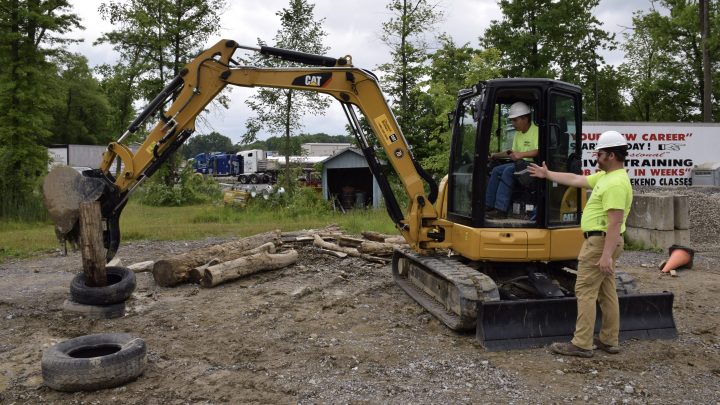 COPY
Dominic Johnjulio is learning to operate heavy equipment as part of a federally-funded retraining program after being laid off from Magna Seating, a General Motors supplier. Tracey Samuelson

Dominic Johnjulio is learning to operate heavy equipment as part of a federally-funded retraining program after being laid off from Magna Seating, a General Motors supplier. Tracey Samuelson
Listen Now

When Dominic Johnjulio was laid off from his job on the assembly line at Magna Seating in Warren, Ohio, he tried looking for other jobs.

Magna supplied seats for the Chevy Cruze that General Motors made at its Lordstown, Ohio, assembly plant. When GM stopped producing new cars there in March as part of a companywide restructuring, Magna shut down its nearby plant the same day.

Johnjulio had worked at Magna and its predecessors for 22 years and was making about $21 an hour when he was laid off.

“A good, decent-paying job, like I had — it’s kind of hard to find these days,” he said.

The job openings he did see all came with big downsides. They didn’t pay enough, didn’t offer benefits, were too far from his home or required working nights.

Rather than take one of those positions, he enrolled in a 10-month program at the nearby New Castle School of Trades, which will prepare him to get a commercial driver’s license and operate heavy equipment. It’s being paid for by a federal program called Trade Adjustment Assistance, or TAA, which provides retraining and prolonged unemployment benefits to workers who have been affected by foreign competition.

For Johnjulio, retraining was the obvious choice.

“I’m getting paid to go to school through the government,” he said. “You got to take advantage of it. You only get one shot, and if you turned it down, that’s it.”

Five of the 13 students in Johnjulio’s class were either cut from GM or one of its suppliers.

But they’re in the minority. Almost 4,500 workers laid off by GM and its suppliers in Ohio are eligible for TAA, but only about 10% of them have enrolled in the program, according to the Ohio Department of Job and Family Services.

That number may be low, in part, because GM employees can transfer to plants in other parts of the country, if they’re willing to relocate.

Four years after a layoff, workers who received training as part of TAA were no better off than their peers who didn’t retrain, according to Peter Schochet, a senior fellow at the policy-research firm Mathematica. Workers who received other services, like job-placement counseling, had higher employment levels and earnings.

Schochet said some people aren’t well-suited to the retraining courses they choose or struggle to find jobs in their new fields. He also found that younger workers got more out of retraining than older ones.

Anzevino knew that more school wasn’t the right option for him. He already has a degree in accounting, but hated the six years he spent working in that field.

“I have no passion for, ‘I want to be this, I want to be that,’” he said, explaining why he’s not interested in more schooling. “I don’t want to waste my time going into something that I’m going to be unhappy with [at] almost 47 years old.”

Plus, he found new work easily: An aluminum fabricator hired him the day he interviewed for the position.

But the new job requires more hours at a lower pay rate than his old one at Magna.

“Once I get through the probationary period, I’ll still be making $7 an hour less than what I was making at Magna,” he said. “The overtime helps cover a lot of that, but, you know, you’re working 54 hours to make just a little bit less than you made on 40 hours.”

And he works the overnight shift six nights a week.

Anzevino said he doesn’t mind the overnights and that the pay cut is manageable. But having just one day off per week is wearing on him. He has less time to visit his ailing father, play with the kids and do chores around the house.

“It’s definitely impacted everybody, not seeing him as content and happy as where he was,” said his wife, Amy Anzevino.