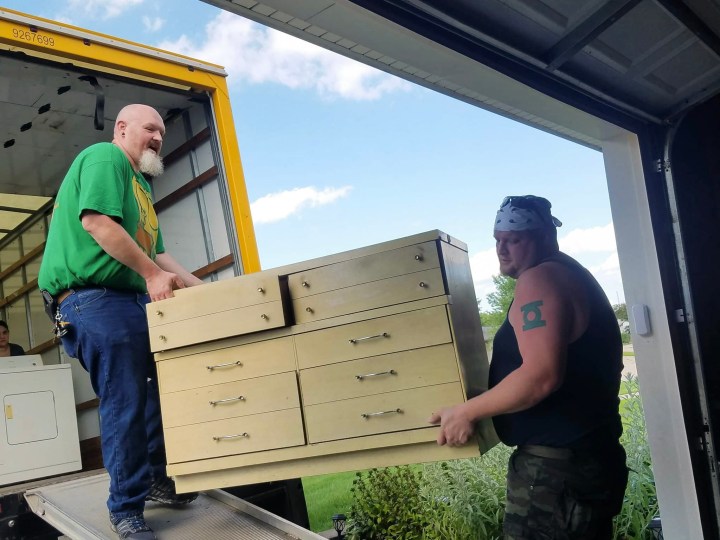 Bonus audio: Some GM workers have moved several times after plants have closed  to keep working for the company. Meet the ‘GM Gypsies.’

This spring, just before Easter, Lincoln Fegley’s family and friends gathered at his favorite BBQ restaurant for one last get-together before he started a new job in a new state.

“That was the most crying I’ve ever seen out of a group of adult men,” his wife Millisa recalled.

Fegley was born just a few miles away from his home in Warren, Ohio, and didn’t want to leave the area. But he was laid off when General Motors stopped production at its nearby Lordstown plant in March. A few weeks later, Fegley received a letter from the company transferring him to a plant in Wentzville, Missouri — a ten-hour drive away.

He said accepting the offer didn’t feel like much of a choice. Fegley makes almost $30 an hour with GM.

“Where else can you go and make this kind of money?” he asked. “Around here, the best stuff is $16 an hour, an hour or hour and a half from my house.”

Jobs closer to home range from between $9 and $11 dollars. “That just that doesn’t cut it,” he said. “When I was working that before I started at GM, my credit cards just kept getting fuller and fuller, just trying to make it.”

In November, GM announced it would idle production at five plants and cut 15% of its salaried workforce in 2019, as it shifts production from sedans and smaller passenger cars to larger, more popular models and invests in developing electric and autonomous vehicles. It said the restructuring would save the company an estimated $6 billion by the end of 2020.

“These were difficult decisions, but were made to keep our core business strong and due to the market shift from passenger cars to crossovers, trucks and SUVs,” a GM spokesperson told Marketplace in an email. “Our goal is to build a strong future for our employees and our business.”

GM has said it has new positions for nearly every one of the 2,800 hourly workers at the impacted plants, provided they are willing to relocate. Already, more than 1,700 employees have been placed at other GM plants.

That leaves the decision to workers and their families: Do they uproot their lives to follow the company and preserve their paycheck, or do they leave GM to stay in their communities?

The choice isn’t an easy one.

GM’s current contract with its union, the UAW, expires in September; talks are underway to negotiate a new agreement. Whether the idled plants will be permanently closed must be negotiated during these talks, and many workers are holding out hope that GM will decide to build a new car or product in the affected factories.

In the meantime, laid-off workers must decide whether to move voluntarily to new plant.

GM is also assigning some employees to new plants through involuntary transfers. If a worker receives a so-called “forced transfer” and they decline, they lose unemployment benefits from the company, including healthcare, pay that supplements state unemployment benefits and rights to transfer to other GM plants.

Trying to game out whether to volunteer for transfer now or try to wait out the contract negotiations can be a complex, stressful decision.

“It’s like they’re asking you to go all in on a bet, but you can’t look at the cards,” said Dave Green, president of UAW Local 1112 at the Lordstown plant. “This is your livelihood, your family, your income. Do you go all in or do you wait and pass for the next hand? I can’t give anybody the right answer.”

That doesn’t stop his former colleagues from swinging by his office to ask his advice.

“I’m trying to stick it out till I turn 62 in October,” said Ron Thompson, catching Green in the hallway on a recent visit to a transition center set up in the union hall.

Lordstown is Thompson’s third GM plant. He started with GM in 1997 and moved to Texas after GM’s Broening Highway plant in Baltimore, where he’s from, closed in 2005. He’d hoped to transfer back to another plant closer to home, but after eight years in Texas, the best he could arrange was a transfer to Ohio, where he could more easily drive to visit family in Maryland.

“You might have to go somewhere,” Green told Thompson, after considering his level of seniority.

For months, Green resisted putting in for a voluntary transfer of his own, wanting to stay and continue to lead the local union as long as possible. But he recently volunteered and was approved for a transfer to a GM plant in Indiana.

Thompson was trying to avoid another move but, like Green, recently decided it was better to volunteer for his preferred location than be forced to go somewhere else. He’s planning to spend between three and six months at plant in Kentucky, living in a rented apartment, and will likely retire this winter.

“You know, the carrot that this company carries, with the benefits and the pay, it’s a way of life that everybody gets accustomed to,” he said. “We don’t want lose it. You get spoiled, so people chase it.”

In Texas, Thompson said he worked alongside “transients” from all over the country.

“I mean, you could spend all day and not find somebody from Texas,” he said.

Gary Wyant, a Lordstown assembly line worker, calculated that based on his start date at GM, he was 57 slots away from being issued a forced transfer when he decided to put in a request to relocate to plants in Bowling Green, Kentucky, or Toledo, Ohio.

“I wasn’t, personally, going to wait,” he said of his decision to volunteer for a transfer. “My wife really didn’t want me to be that airplane ride away in Texas. She’d rather me be able to drive.”

GM approved his transfer to Bowling Green, a seven-and-a-half-hour drive from his home in Ohio. For now, his wife will stay in Ohio because their son has in-state tuition at a local college. Plus, they’re concerned that the Kentucky plant may go through layoffs of its own.

After a GM idled a transmission plant in May in White Marsh, Maryland, employees gathered at a nearby bar to both commiserate and celebrate their time together.

“Everybody here’s been to a couple of plants already,” said Louis Phipps Jr., a 28-year veteran of GM, as he surveyed the room. “They call us ‘GM gypsies.’ When a plant closes, you’ve got to keep going till you get your time in [and can retire.]”

Phipps, a forklift operator, is one of a few employees who’s still working in the White Marsh plant. With two years left before he qualifies for his full GM pension, Phipps is worried he may have to move again. He’s already moved once; after being laid off in 2008, he spent two years in Lordstown before arranging a transfer to White Marsh.

Phipps’s father spent his entire 40-year career at GM’s Broening Highway plant in Baltimore. But Phipps said the days of autoworkers spending their entire career in one plant are long gone.

His son was also worked at the White Marsh plant and was laid off in May. He’s planning to transfer to another GM plant, but his wife and children will likely to stay behind.

“He wants to stay with GM,” Phipps said.