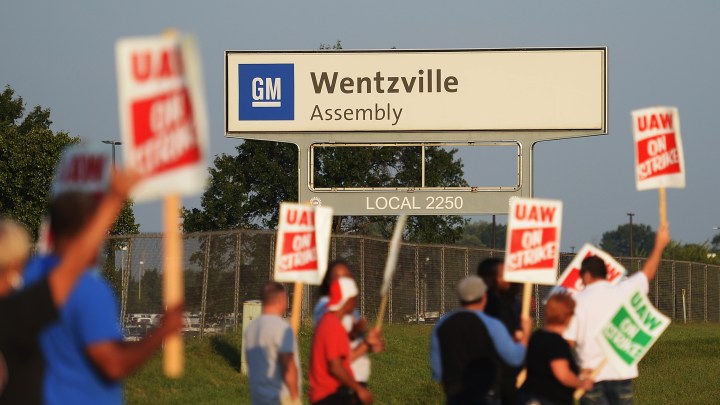 Most afternoons, Lincoln Fegley works on the dashboards of new vehicles on General Motor’s assembly line. But one afternoon this week, he and his wife, Millisa, were in the school pickup line, waiting for their daughter Serenity.

Lincoln hesitated in the parking lot, not quite sure where to go.

“This is my first time picking her up because I work second shift,” he said. “So unless I see Serenity in the morning, I don’t pretty much don’t see her at all until my one day off.”

The past few months have been a whirlwind for the family. After GM idled its Lordstown, Ohio, plant and laid Lincoln off, he moved to Missouri in April to take a job at the automaker’s Wentzville Assembly factory. He bought a new house in June. Meanwhile, Serenity and Millisa stayed in Ohio to finish out the school year.

The Fegleys love their new house, but they haven’t had much of a chance to settle in yet.

“This is going to sound crazy, but we really haven’t had time to do anything, Millisa said. “He just came off of a 12-day streak where they didn’t have a single day off.”

In some respects, the strike is giving the family the time to take a breath and do some things around the house, like unpack boxes and change the oil in their cars.

“I’m going to say probably about a month ago, I actually bought all the stuff to change the oil on these,” Lincoln said while lying on the floor of his garage. “And I’m just now getting the time to do it.”

During the strike, each of the 4,500 members of the UAW Local 2250, including Lincoln, have to do one four-hour shift a week, helping out at the union hall or picketing. But Lincoln wants to do more.

Like many workers, he wants GM to reverse some of the concessions the union made to help the automaker get through the financial crisis — like allowing a two-tier wage system and forgoing cost-of-living pay increases. Most importantly, he wants GM to make its temporary workers permanent.

“That’s a huge issue,” he said. “I spent four years as a temp before finally getting hired, and there are people here who’ve been temps for five years.”

“You know after 90 days whether you want somebody to stay on or not,” Lincoln said. “It’s just abusive. It’s just wrong.”

On the picket line, Anita Haynes said she’s been a temp for a little over a year.

She likes working at GM but doesn’t like that she’s treated differently.

“Whether you’re a temp or permanent, you’re human,” she said. “If you’re working eight to 12 hours a day building a product, and when it comes time for profit sharing, you don’t get anything, that’s like a slap in the face.”

GM workers say the strike is a sacrifice they’re willing to make. They only collect $250 a week in strike pay from the UAW while they aren’t working.

The Fegleys think they’ll be OK financially for a couple of months, but they haven’t had a chance to save much recently, given the expenses of moving and buying a new house.

“If it gets that bad, I’ll start selling collectibles I have,” Lincoln said.

But they’re hoping the strike doesn’t last that long.