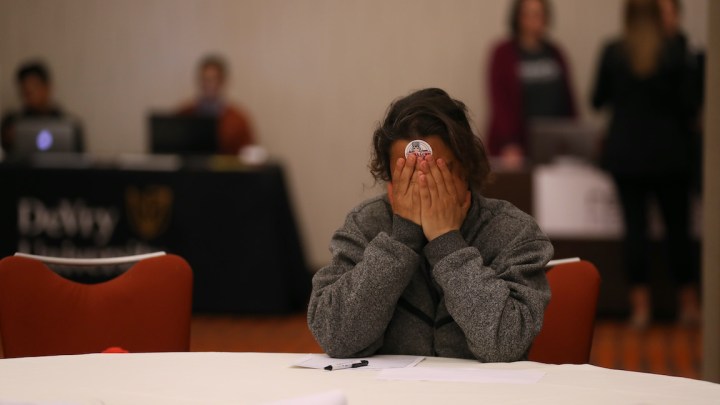 A woman covers her face, pausing while filling out a job application in San Francisco. Justin Sullivan/Getty Images
Listen Now

The Labor Department reports that 20,435,018 Americans were collecting unemployment benefits under state or federal pandemic programs in the week ending Jan. 23, up 2,596,539 from the previous week. First-time claims fell 19,000 to 793,000 in the week ending Feb. 6. That’s a higher level than any single week during the Great Recession or any recession going back to the late 1960s, according to the St. Louis Fed.

To find new jobs, many of those who’ve lost jobs in the pandemic will need to upgrade skills and credentials or retrain for new professions.

And some of that is already happening. The Pew Research Center reports from a recent survey that “two-thirds of unemployed adults said that they’ve seriously considered changing fields or occupations since they’ve been unemployed,” said senior researcher Ruth Igielnik. “Meanwhile, one-third have taken concrete steps to retool their skills by pursuing job retraining programs and educational opportunities.”

But getting all the cogs in the back-to-work machine turning together for the millions of unemployed workers in America won’t be easy.

Case in point: In normal, nonpandemic times, Manny Rodriguez would have 20 to 25 local men and women enrolled in the construction pre-apprentice program he runs in West Chicago through the nonprofit organization he directs, Revolution Workshop.

“We recruit from underserved communities — typically we’re talking about black, brown and women,” Rodriguez said. “The community desperately needs upskilling and a pathway into family-sustaining careers.”

Rodriguez said nearly 90% of those enrolled graduate and go on to land construction jobs paying $18 an hour or more.

““The pandemic happened, and 75% of the folks that we have placed were laid off,” Rodriguez said. So he shifted staff to help those laid-off recent graduates deal with their financial hardships: “We were paying things like rent and car notes and cellphone bills, because I didn’t want them to lose their cellphone, and then an employer tries to call them back and now the number doesn’t work.”

And Rodriguez didn’t want to send more construction apprentices out into the job market when opportunities were so thin.

“Our employer-customers were telling us, ‘We don’t have any slots for your folks.’ I want to be able to say to our graduates, ‘Hey, these are jobs that are really there.'”

Rodriguez does see the market starting to pick up again. In December, Revolution Workshop started a new cohort of eight students in the training program, and it’s recruiting for another class to begin in the spring.

Nationwide, enrollment in community colleges is down since the pandemic hit. That’s where a lot of people go for industry certificate programs and job retraining.

“The community college sector is central to our efforts to get people back to work,” said Urban Institute higher-education economist Sandy Baum. “But there are barriers facing students — how do they pay for it? And people are really struggling just to get through their days. The idea that you can also take classes at the same time you’re trying to put food on the table or take care of your kids — it’s a real challenge.”

Thirty-year-old Jeremy Smith of Reno, Nevada, was laid off from his job as a casino valet when tourism all but shut down in March. He took his relief check and some savings and went back to community college.

“I was able to graduate with a bachelor’s in supply-chain management about two semesters early,” Smith said. “So it ended up kicking me down the road a little quicker than I planned on.”

He was never called back to his valet job and doesn’t want to work service jobs anymore. So he’s looking for a job in his new field.

“Here in Reno, I don’t feel very great about it,” Smith said. “The local economy here is very much built around tourism. I’m looking out of state, in California and Utah. I’m sure it’ll come roaring back, but it’s a little dry right now.”