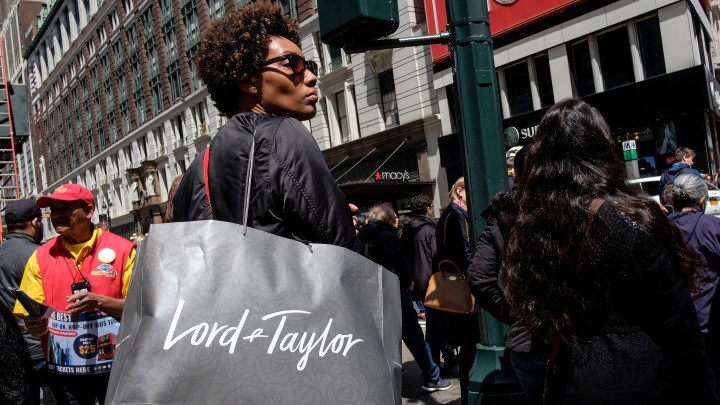 COPY
Retail sales were up 0.4 percent in August. Above, a woman carries a shopping bag in the Herald Square neighborhood in New York City. Drew Angerer/Getty Images

Retail sales were up 0.4 percent in August. Above, a woman carries a shopping bag in the Herald Square neighborhood in New York City. Drew Angerer/Getty Images
Listen Now

Consumers are still in the mood to spend.

Retail sales were up 0.4 percent in August, much more than economists were expecting. That comes on top of a strong July. Plus, consumer sentiment, as measured by the University of Michigan, has rebounded some going into September. It had been falling on scary news about the trade war and rising recession risks.

At the same time, we keep getting reports that business investment is down, as is confidence among business owners and decision-makers.

“To some extent, they’re living in different worlds,” said Brad McMillan at Commonwealth Financial. He said businesses are worried about the global economy and the risk of recession. “They have to hire people, the labor market is quite tight. They have to buy supplies. That’s been complicated by the trade war. So they’re getting hit on a bunch of different fronts.”

McMillan said consumers have not seen much impact from tariffs so far. What matters most to them is, “ ‘Am I working? Do I have a good job? And am I getting a raise?’ So as far as the consumer is concerned, everything is good.”

But in the business world, growth in capital spending has fallen by half this year, said Sam Stovall at CFRA Research. He said many CEOs are well aware that “this is the longest economic expansion in history, or at least since 1857, and sooner or later it will end up slowing.”

Or ending. Six in 10 business decision-makers think a recession will hit in the next 18 months, according to a new survey from Grant Thornton.

“There’s a pause right now, a pause to plan for potential recession,” said Chris Stephenson, an analyst at Grant Thornton.

Consumer attitudes aren’t anywhere near as pessimistic, said Richard Curtin, who runs the consumer sentiment survey at the University of Michigan.

“They’re not at their record peaks anymore, but they’re still very positive,” he said.

Curtin said with the job market strong and wages rising, consumers, whose spending makes up two-thirds of gross domestic product, are brushing off warning signs of a coming recession.