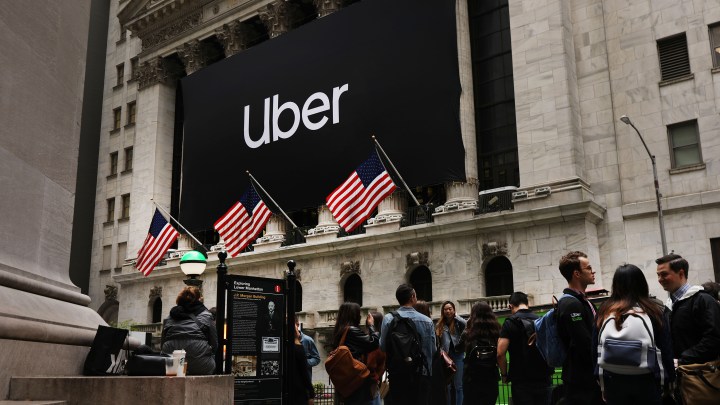 COPY
The Uber banner hangs outside of the New York Stock Exchange before the opening bell as the ride-hailing company makes its highly anticipated initial public offering in May 2019 in New York City. Spencer Platt/Getty Images
Shelf Life

The Uber banner hangs outside of the New York Stock Exchange before the opening bell as the ride-hailing company makes its highly anticipated initial public offering in May 2019 in New York City. Spencer Platt/Getty Images
Listen Now

The following is an excerpt from Mike Isaac’s new book, “Super Pumped: The Battle for Uber.” It covers the rise of the rideshare company Uber and the fall of its founder and former CEO, Travis Kalanick. Click the listen now button to hear Mike Isaac’s interview with Kai Ryssdal.

No one wanted to walk home that night.

It was winter in Portland, 2014, cold enough to need a heavy jacket. Downtown traffic was thick with students, commuters, and holiday shoppers buying gifts. It had snowed earlier in the week; the streets were still slick with rain and melted flurries. White, flickering Christmas lights lined the trees along Broadway downtown, a festive backdrop for the holiday season. But it wasn’t a good night to be waiting around for a bus. The local transportation officers stood outside in the cold — damp, bored, and annoyed — trying catch a ride.

The officers weren’t looking for a cab home. They worked for the Portland Bureau of Transportation and had a mandate: Find and stop anyone driving for Uber, the fast-growing ride-hailing startup. After months of trying to work with city officials to make the service legal in the city, Uber had thrown negotiations out the window. The service was launching that evening, without the bureau’s approval.

For Uber, it was business as usual. Since 2009, the company had faced off against legislators, police officers, taxi operators and owners, transportation unions. In the eyes of Travis Kalanick, Uber’s co-founder and chief executive, the entire system was rigged against startups like his. Like many in Silicon Valley, he believed in the transformative power of technology. His service harnessed the incredible powers of code — smartphones, data analysis, real- time GPS readings — to improve people’s lives, to make services more efficient, to connect people who wanted to buy things with people who wanted to sell them, to make society a better place. He grew frustrated by people with cautious minds, who wanted to uphold old systems, old structures, old ways of thinking. The corrupt institutions that controlled and upheld the taxi industry had been built in the nineteenth and twentieth centuries, he thought. Uber was here to disrupt their outmoded ideas and usher in the twenty-first. Nevertheless, transportation officials were beholden to legislators, and legislators were beholden to donors and supporters. And those donors often included drivers’ unions and Big Taxi, the groups who wanted Uber to fail.

Uber had already tried the nice-guy approach in Portland. Twenty-four hours before, Kalanick had dispatched David Plouffe, an expert political strategist, to smooth things over with city transportation officials. Plouffe was a silver-tongued creature of politics. Many believed his mastery had helped Barack Obama clinch the presidency in 2008. Plouffe knew exactly the right notes to hit with local politicians. He called Charlie Hales, Portland’s affable mayor, to brief him on Uber’s next steps. Hales took the call in an office in City Hall, joined by Steve Novick, his transportation commissioner.

If Hales was a nice guy, Novick was his enforcer. Standing four feet, nine inches tall, with thick glasses and a voice that pitched steadily higher as he got angry, Novick was a bulldog. The son of a waitress and a New Jersey union organizer, Novick was born without a left hand and missing fibula bones in both of his legs, disabilities that enhanced his pugilistic spirit. After graduating from the University of Oregon with his bachelor’s degree at eighteen years old, he went on to earn a Harvard law degree by the age of twenty-one. He had a sense of humor, too: in past campaign advertisements, Novick branded himself “The Fighter with the Hard Left Hook”— a reference to the metal hook- shaped prosthesis that capped his left arm.

Plouffe opened talks with a friendly overture, letting the two local politicians know that Uber had waited long enough, and with a folksy, familiar tone in his voice — a classic Plouffe touch — said Uber was planning a launch downtown the next day.

“Well, guys, we’re already in a number of suburbs outside of Portland, and there’s just so much pent up demand for our service in your great city,” Plouffe said. Uber’s pitch since Plouffe came aboard was a smart one, populist in tone. The service was a way for individuals to earn money using their own cars, on their own terms, setting their own schedule. It would reduce the number of drunk drivers on the road, improving city safety, and passengers would have another convenient option in places where public transportation wasn’t fully mature. “We’re really trying to provide a service to your citizens here,” he went on.

Novick wasn’t having it. “Mr. Plouffe, announcing that you’re going to break the law is not civil,” he said, his hook digging into the mayor’s desk in frustration. “This is not about whether we should have a thoughtful conversation about changing taxi regulations. This is about one company thinking it is above the law.”

Novick and Hales had tried to tell Uber for months that the company couldn’t just roll into town and set up shop just because it was ready to do so. The taxi union would have a conniption. Furthermore, there were existing regulations that prevented some of Uber’s services from operating. And since ride-hailing was such a new phenomenon, much of Portland’s existing rules didn’t address the practice — laws for Uber just hadn’t been written yet. Uber would have to wait.

It wasn’t as if Novick and Hales were being inflexible. Hales had promised to overhaul transportation regulations upon entering office. Just a few weeks prior, Portland was one of the first cities in the country to draft rules that allowed Airbnb, the home-sharing start up, to operate legally within the city’s confines. And for more than a year, the hope was that such a forward-thinking city could do the same with ride-sharing.

But Portland’s good intentions weren’t delivering on Kalanick’s time frame. Now, the two sides found themselves at an impasse. “Get your fucking company out of our city!” Novick yelled into the speaker phone. Plouffe, the charmer, was silent.

Uber’s nice- guy approach hadn’t worked. But it wasn’t designed to. Over the previous five years, the company had grown from a startup employing a couple of techies in a San Francisco apartment to a burgeoning global behemoth operating in hundreds of cities across the world. It had done so by systematically moving from city to city, sending a strike team of employees to recruit hundreds of drivers, blitz smartphone users with coupons for free rides, and create a marketplace where drivers were picking up passengers faster than the blindsided local authorities could possibly track or control. This was the plan for Portland as well, no matter what the mayor and his enforcer had to say. And Travis Kalanick was tired of waiting.

“Reprinted from Super Pumped: The Battle for Uber. Copyright © 2019 by Mike Isaac. Used with permission of the publisher, W. W. Norton & Company, Inc. All rights reserved.”