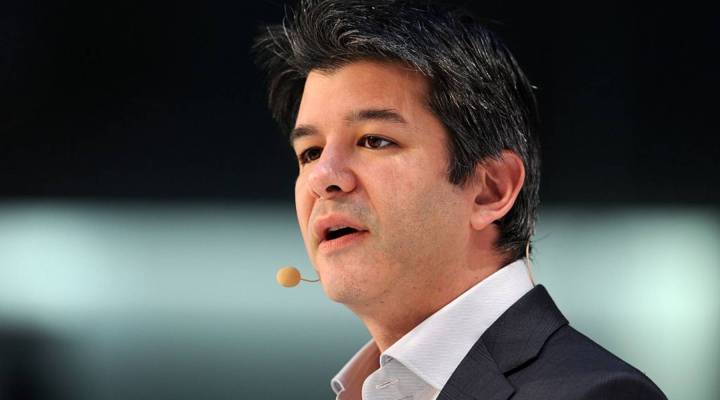 COPY
Despite scandal after scandal, there may still be investors who consider Kalanick's personality crucial to Uber's success. TOBIAS HASE/AFP/Getty Images

Despite scandal after scandal, there may still be investors who consider Kalanick's personality crucial to Uber's success. TOBIAS HASE/AFP/Getty Images
Listen Now

On Sunday, the Uber board of directors received a report by former Attorney General Eric Holder on Uber’s company culture under founder and CEO Travis Kalanick — and its dysfunctions. While they accepted Holder’s report without question, it left the rest of the business world wondering what’s next for Uber and for Kalanick. Marketplace host Kai Ryssdal got senior tech correspondent Molly Wood on the line to talk about what’s in store for Kalanick. The following is an edited transcript of their conversation.

Kai Ryssdal: So help me out, first of all, with the basics. This Holder Report — that is, Eric Holder, former attorney general — whence did it come? How did we get here?

Molly Wood: This was an external investigation that came about as a result of the fairly explosive blog post that alleged sexual harassment. And also just massive HR and internal mismanagement. So that led to several more complaints and this investigation. The report and the results of that report were delivered to the Uber board of directors on Sunday. So we don’t yet know what is in it. But it contains a series of recommendations that reportedly the board says they’re going to accept in total.

Ryssdal: And unrelated to this report, there are reports out there that the founder of this company, Travis Kalanick, is going to take a three month leave of absence. What do we know about that?

Wood: Right. So Uber has not confirmed that. But there were reports coming out of the board meeting that Travis Kalanick had himself suggested a three month leave of absence that the board might approve. That comes, of course, after Travis Kalanick’s mother, unfortunately, was recently killed in a boating accident. So it would not be an unexpected thing for him to do, even if the company weren’t in trouble. I would caution that it should not necessarily be seen as a disciplinary action given what’s happened in his personal life. But it certainly wouldn’t be a huge surprise, although it’s not confirmed yet.

Ryssdal: All right, so let me get you to something else now. We’re going to hear real soon in the program about Jeff Immelt and General Electric. Also Mark Fields, the former CEO of Ford, was forced down. How is it that those two guys who made business mistakes lost their jobs, but Travis Kalanick, whose company has a culture which is far worse, still has his?

Wood: Yeah. I mean, I would give you two reasons. One is that the company is private at the end of the day, and so there isn’t shareholder pressure, necessarily. There is certainly investor pressure, and we know that investors were calling Uber’s board of directors and asking them to fulfill fiduciary responsibility because they are worried about it, but there isn’t a well-documented, publicly available, negative financial effect yet. The other thing is that this is, you know, it’s very typical of Silicon Valley to have a company that is essentially built in the image of its founder. In this case, Travis Kalanick has a lot of board control. Most of it, in fact, majority voting rights. And so, it’s actually really hard for the board to get rid of him unless they all decide that he should go. And his personality is one of the things that they consider to be crucial to the success at Uber, or at least they have in the past.

Ryssdal: Last thing and then I’ll let you go. Last time this company raised money, it was valued at plus or minus $69 billion. It is, let’s say it again, a private company. What would be going on in the open markets now were this a publicly traded company?

Wood: I mean, you got to think that they would take a hit based on the PR alone. But the other thing I’ll say about Uber is we actually have no idea about the financial health of the company. And you know that Wall Street doesn’t mind a lot of misbehavior as long as you’re winning. If this business model is really successful, and frankly we don’t know the answer to that question, they might be fine.