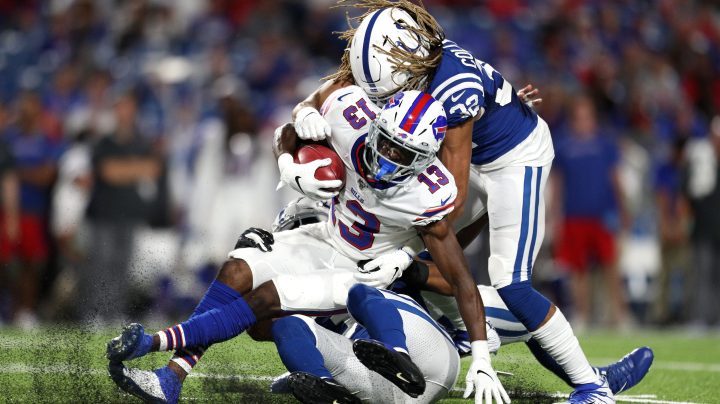 COPY
Victor Bolden of the Buffalo Bills is tackled by Jalen Collins of the Indianapolis Colts during a preseason game at New Era Field on August 08, 2019 in Orchard Park, New York. Bryan M. Bennett/Getty Images

Victor Bolden of the Buffalo Bills is tackled by Jalen Collins of the Indianapolis Colts during a preseason game at New Era Field on August 08, 2019 in Orchard Park, New York. Bryan M. Bennett/Getty Images
Listen Now

My cousin, Kyle, loves fantasy football. It’s safe to say he’s a fanatic. I asked him him how much time he spends playing the game per week.

He said most of that time is spent listening to fantasy football podcasts.

“I listen to podcasts while I’m getting ready for work and usually I’ll be listening to podcasts throughout the day while I’m working,” he said.

He’s a bit of an outlier but he’s not alone in spending time on fantasy football at work. According to a survey conducted by the financial technology firm OppLoans, most people who play do the same.

And that lost time means a lot of lost money.