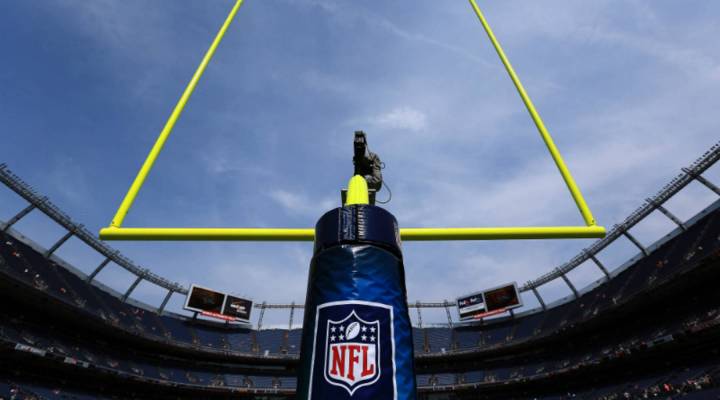 The NFL draft, which begins Thursday in Chicago, has undergone a major evolution.

The draft used to be a closed-door meeting of NFL team officials who huddled to make deals over college players who are drafted into the professional football league.

“It used to be only sports writers cared. They used to hang out in the hotel where the draft is going on,” said Rodney Fort, a professor of sports management at the University of Michigan.

Today, the draft is accompanied by a major festival attended by an estimated 200,000 fans in downtown Chicago. It encompasses an area the size of about 20 football fields, according to officials.

City officials claim last year’s draft, which was also held in Chicago, netted the city more than $80 million in tourism and spending. But some scholars argue that the impact of major sports events on local economies is often overstated, although it is likely to be of some benefit.

Still, commerce has become integral to the NFL draft experience.

“As soon as a player is drafted, shirts go on sale,” Fort said.

The league has multiple corporate sponsors for its draft festival, entitled Draft Town, including Hyundai and the yogurt brand Oikos. The draft process itself is nationally televised. Festival attendees can vie for tickets to witness the event in person.

“The draft’s become a huge spectacle,” said Dan Lebowitz, who heads the Center for the Study of Sport in Society at Northeastern University.

Lebowitz said it is in the NFL’s interest to create a sense of spectacle surrounding football, because it has relatively few games in each of the cities where there are teams.

“When you look at the NFL, you are looking at a league that largely moves by spectacle,” he said.

Television has played a big role in increasing fan interest in both players and the games. Increased interest has manifested in more attention paid to the draft. “That is consistent with the way in which TV contracts have blown up,” Lebowitz said, “particularly in college football and then the pro leagues.”

Aside from TV, the growth of online fantasy sports has also made fans much more interested in the draft and the players, Fort said.

“As soon as you’re able to find out about which players are going to be on which team, the sooner you can put your statistical engine to work to try to figure out how they’re going to contribute to the team they’re put on,” he said.