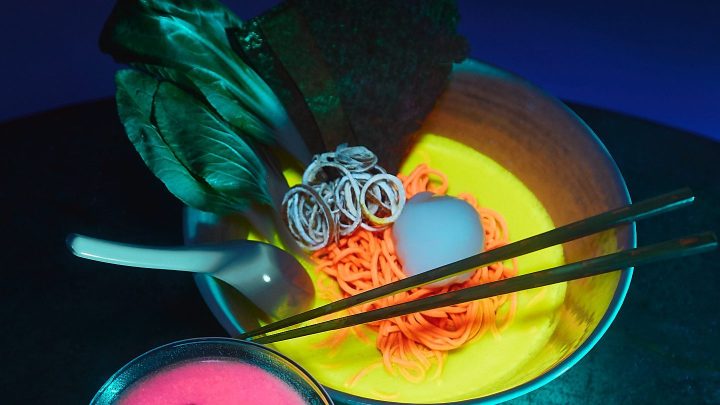 Atop a hill in Hollywood, outside an established Japanese restaurant called Yamashiro, diners wait for a ramen dish that is probably more experience than meal. Sara Katz bought tickets for her and her sons after reading about it online and being intrigued.

“I’m looking to be surprised and to do something that would be cool and different,” she said.

Guests are taken through the restaurant to hear the mythical story of the Nakamura children, who lost their parents. In the story, the parents ran a ramen restaurant, and the kids are trying to re-create that recipe.

“The ramen that they produce glows brighter the closer that they are to finding their parents,” said Romy Maloon, a program director of the arts organization Dashboard who helped produce the story and the restaurant.

Once the theatrical explanation as to why the food looks so odd is done, guests are led into Nakamura, an ultraviolet-lit mobile restaurant housed in a shipping container. Chef Skip Engelbrecht serves up his ramen meal of enoki mushrooms, nori, six-minute egg, togarashi and the lumen noodle.

The dishes have a color palette that looks more like Play-Doh than food, but the colors come from natural substances: chlorophyll glows red; quinine, the stuff that usually makes tonic water bitter, glows bright blue; and vitamin B12 is used for a lurid green.

“It is, of course, very bitter as well, so you have to be quite careful with your balancing of all the flavors,” explained Sam Bompas of Bompas and Parr, a food experience studio that helped create the fluorescent noodles.

Diners pay $83 to stand at a counter and $158 for a sit-down meal that lasts about 30 minutes and includes a glowing cocktail and dessert. Maloon said at capacity, 105 people move through the space per night.

“This is a ticketed experience. We have a good idea of what our food costs are going to be upfront,” she said.

It sold out the first three weeks and dropped to about 75% of capacity for the next three weeks.

The National Restaurant Association expects restaurant sales to reach a high of $863 billion this year, but foot traffic is down as diners turn more to delivery. The association’s Hudson Riehle said American diners are looking for new experiences.

“Their palate is much more sophisticated and knowledgeable than at any point in time,” he said. “It is entirely logical that pop-ups only become more prevalent.”

Full-time restaurants associated with pop-ups can benefit from the buzz without worrying about long-term costs.

Bompas and his partner started creating short-lived food experiences about 10 years ago. A a decade later, they still draw people in with short-lived events, like a “200-course meal, which is, of course, dropping every seven minutes and 14 seconds for 24 hours,” he said.

This ramen shop is wrapping up its six-week Los Angeles run, and the creators are looking for a new city where they can pop up and offer diners a taste of glowing noodles. 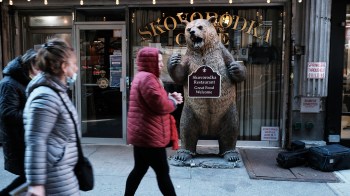