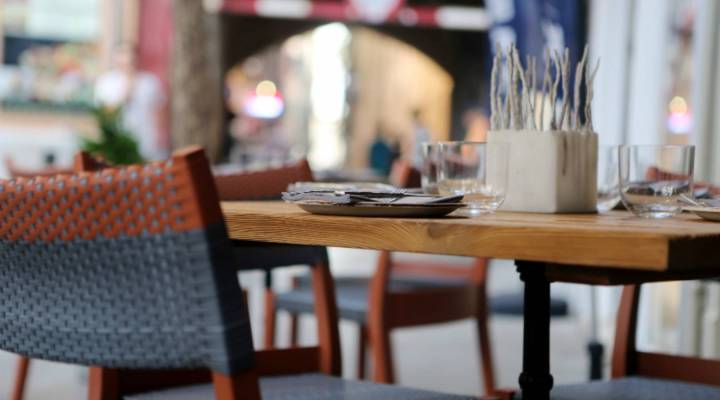 COPY
Restaurants have begun experimenting with including tips, or gratuity, in the price of a meal listed on the menu. Visual Hunt

Restaurants have begun experimenting with including tips, or gratuity, in the price of a meal listed on the menu. Visual Hunt
Listen Now

If you think the reason some restaurants have begun including the gratuity in the price of menu items is just so that they can pay their wait staff more – well, you’d be wrong.  Just ask Debra Blanchard. Sitting at the bar at Freek’s Mill, a new small-plates restaurant in Brooklyn, she notes that dining establishments depend on much more than just the public face wait staff provide.

“My family has always been driven crazy by me,” said Blanchard, who used to be a waitress, “because I’m like, you have to leave a good tip and they’re like, what if it’s bad service and I’m like the service is not always a function of your wait staff.”

“What people aren’t saying about this is that it’s more about the cooks and less about the restaurant as a whole,” said JT Stewart, owner of Freek’s Mill.

The recipe, said Stewart, is a simple one. Doing away with the traditional American practice of diners deciding on how, and how much, to tip is all about the cooks. Chefs create menus and design recipes. But cooks — from prep to line — chop the ingredients and cook the food. Wages for cooks, notes Stewart, have stayed low for years.

“When I was in culinary school, almost 20 years ago, they were about the same,” he said.  What we were told my first day in culinary school was that we would come out of school at a base of about $12 an hour and we would move up from there. And that was in Arizona.”

But this is New York, two decades later.  Which is why, when it opened a couple of months ago, Freek’s Mill established a gratuity-free policy.

Notes Stewart, he’d like to pay all of his staff more. But he’s worried. If he raises price,  diners will go down the street. At the same time, minimum wage is on the rise. Which means he’s left in an unusual bind. “We are going to have to compete against McDonald’s soon” [for talent], he said.

Freek’s Mill, with a menu listing dandelion salad and dry-aged duck, would be paying workers the same wages as a fast-food restaurant. Thus, Stewart’s revenue sharing plan. But the policy did lead to some discussions with potential staff when he was hiring. “The conversation with the wait staff was definitely more in depth than it was with the cooks,” he said. “The cooks were like, awesome. I’m in.”

Other restaurants like Huertas in New York’s East Village say sharing revenue means they get to manage their workers better.

“What including gratuity in the price of the meal does is allow us to pay people based on merit,” said Nate Adler a managing partner at the restaurant.  “Even if someone wants to be a career server, instead of chasing a bartending role that they don’t think they’ll be that good at and we don’t want them to do necessarily, we can actually give them a raise within their own job group. It empowers the managers and the ownership to do more with labor.”

It also lets management and workers avoid what’s known in the industry as “shift chasing,” when wait staff jostle to get assigned what are seen as plum shifts — Friday and Saturday nights.

“What that does for the restaurant is the guys that are working on Friday and Saturday might be your top guns,” said Adler. “Monday and Tuesday you have a little bit lesser of a staff and the quality fluctuates over the course of the week. And also those employees are forced to work Friday and Saturday night shifts, just because they need to make a living.”

Whatever you call it, a tip or gratuity, it is pay. And letting restaurants handle it makes them the boss, said Adler, instead of the diner. So far he said, at his restaurant the policy has been a success.

“We’re paying people in the back of the house, two dollars more than they were making before,” he said. “Which means essentially that on a really good night they actually get paid more.”

But not everyone in the industry gives the idea of revenue sharing four stars. While restaurants are increasingly adopting the new policy, others, who’ve given it a whirl, are now stepping back.

“I mean come on. It’s a service thing,” said Jeremy Merrin, vice president of the New York City chapter of the New York State Restaurant Association and founder and CEO of Havana Central restaurant group which owns four Cuban restaurants. “Right now, my servers, their boss, the person who pays their bill, is the person is the person sitting in the seats. They have to do everything they possibly can to make that customer happy, ” he said. But if they don’t, “there’s no question that their attention to detail will go down.”

Besides, notes Merrin, even if he wanted to raise wages enough to cover tips it wouldn’t be possible. “There isn’t a lot of revenue to share,” he said. “If you want to go to Per Se, and spend $400, if you have to spend $440  for that kind of customer, for that kind of guest, it’s not going to make a difference.”

Revenue sharing can work, he said, but only for high-end restaurants which can raise prices without scaring away diners.

“I’m selling rice and beans and chicken. I compete with the local bodegas,” he said. “At the end of the day I think there’s only so much people are going to pay for rice and beans.”

Correction: A previous version of this story misstated the location of Huertas. The text has been corrected.