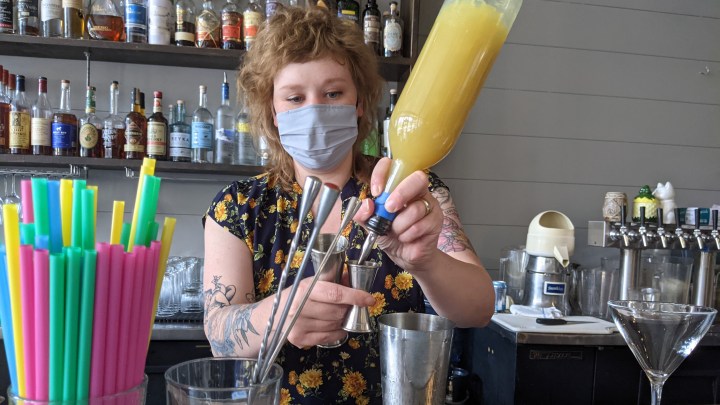 At the Portland Hunt & Alpine Club — a Scandinavian-themed bar a few blocks from the waterfront in Portland, Maine — bartender Hayley Wilson pours drinks for customers. She says she’s happy with her job, which pays about $15 per hour plus tips, and that she enjoys making people happy.

“And that’s what we do every day, is tiny individual parties for people,” Wilson said. “I love the aspect of taking care of people.”

Wilson said she hadn’t felt that same love over the previous 18 months. Like many restaurants, the Hunt & Alpine Club was forced to shut down last year. After it reopened, Wilson said, staff had to take on new responsibilities, acting as makeshift bouncers and enforcing mask mandates at the door.

“We would have to stand in the doorway, and kind of use our bodies to block people from coming in who aren’t wearing masks,” she said. “And repeating the same thing over and over. And getting eye rolls or frustration or aggression from it. It takes a toll on someone.”

The pushback has been even worse in recent weeks. Tourists have flocked back to Maine this summer. With COVID-19 cases rising, the bar instituted a new rule requiring customers to be vaccinated if they wanted to eat indoors. While many diners have been understanding, Wilson said others have fought back.

“It kind of breaks my heart, a little bit, to think about that if I wasn’t here, if I wasn’t making the livable wage that I am, with benefits and tips on top, I would probably be considering leaving the industry for something more stable,” she said.

The pandemic has forced many restaurant workers to face that same dilemma, as business closures and changing health protocols have put additional pressures on workers.

The pandemic seriously impacted many restaurant employees, said Diego Bufquin, a professor of hospitality management at the University of Central Florida. A study by Bufquin and his colleagues found that restaurant workers who stayed on the job last year had more stress and used more alcohol and drugs than those who were furloughed. Some looked to leave the industry.

Bufquin isn’t surprised that when many restaurants reopened this year, workers were tough to find.

“And so for hospitality companies to try to attract these folks back to their sector, they must, of course, offer a variety of perks to attract those employees,” he said. “So that’s the whole phenomenon that we’re seeing right now.”

The issue is a long time coming; many workers have been forced to deal with low wages and benefits for years, said Daryle Degen, whose company, Maine Cater, works to recruit staff members for restaurants in northern New England. He currently has a waiting list of more than 100 clients, caterers and restaurants in Maine and New Hampshire, who need staff.

“And the shoe is now on the other foot,” Degen said. “Now it’s the job seekers that have all the power. They are the ones that can dictate what they’re looking for, in terms of rates of pay, benefit packages.”

But some workers have said they’d like to see more — such as an increased federal minimum wage and change to the lower, so-called “tipped wage” — so that pay is more reliable.

Matt Lewis, who heads Maine’s hospitality trade group, is asking for a bit of patience from customers as stretched restaurants and workers attempt to manage this summer’s deluge of tourists.

Some Maine restaurants are looking at new ways to meet workers’ needs, including potentially helping them find housing, Lewis said. The industry still expects the labor shortage to continue for years to come.