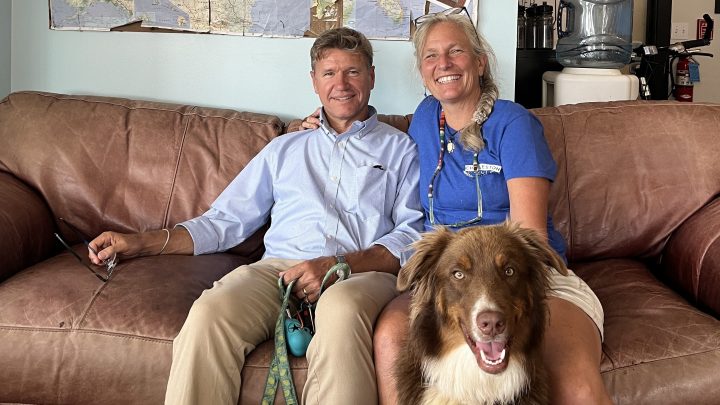 The big quit. The great resignation. Whatever you want to call it, millions are leaving their jobs. We’re doing a series about those who chose to follow their calling.

In 2019, Leah Day had been a clinical social worker for 23 years. She was seeing five clients a day at her private practice in downtown Portland, Maine.

And she barely had time to eat lunch; it was just one therapy session after another. And it was heavy.

One of her clients would be getting a divorce, “and then eight minutes later, someone would come in, and [the Maine Department of Health and Human Services] was thinking about taking their children,” Day said.

Then, Day would run to catch a ferry home, where her 16-year-old son Oakley would be waiting for dinner.

Her husband, Twain Braden, a maritime lawyer, remembers those ferry rides together. As they would pull away from Portland, they could see the city lights twinkling across the harbor. It looked so pretty to him.

And at almost 50, Day was also getting restless. It’s kind of her nature. She has this pivotal memory from high school of looking out her classroom window and noticing how green the grass was. She had to get out there.

She went to the park. She just wanted to wander around.

Day always liked to be outside; she later led wilderness expeditions for Outward Bound. So maybe it’s not surprising that she would have a long-standing dream of going across the country on a bike.

And in 2019, when she needed a change, her son Oakley did too. He’s a lot like her — restless, always seeking adventure, and he had a habit of running away from home.

What if they did a bike trip together?

She talked to her husband, and financially, it was a stretch. “I remember being so stressed out about it and feeling guilty,” she said.

Braden would be working. Plus, Day would have insurance reimbursements from therapy trickling in. But they had three kids in college, lived paycheck to paycheck and had lots of debt. He was supportive though.

Off they went for three months. They carried what they needed on their backs, and at night they camped out and slept at cheap or free hostels. On the trip, she couldn’t wrap her head around the idea that she might do the same job for the next 20 years and then retire. It just felt narrow.

Then it hit her: She didn’t have to. She and Oakley were biking through what she thinks was a high desert in Montana. There she was, the sun shining bright, the horizon expanding for miles in every direction.

“Just feeling like this world is so big ⁠— and there’s nothing saying that I have to follow this structure of this is how one lives a life,” Day said.

Day still didn’t know what she wanted to do for work. She started substitute teaching. Then the pandemic happened, and she went back to doing therapy sessions — by video chat, from a tiny bathroom in her house.

“So I went from, like, the world to my bathroom,” Day said. “That’s where I counseled people for a year. And it was in that moment that I was like, ‘I’m getting out of here.’”

In February 2021, she and Braden cooked up an idea: She could open a bike shop in Portland to rent bikes, repair them and give tours of the Maine coast.

She got a $69,000 loan from a nonprofit, and she and Braden put in $12,000 they had saved up. Day rented the space, bought a bunch of bikes and equipment, and got ready for opening day in May.

“Pouring rain,” she said. “And it poured rain like for the first week, and I had hired two guys to come work here, like one tour guide, one mechanic. We were like, ‘Wow, there’s nobody coming in. No one knows we exist.’”

But customers started to trickle in, and that summer got busy. She was running tours, manning the shop and writing a book called “Changing Gears” about the bike trip.

By the fall, she was burning out.

“I would dream about bicycles. And they wouldn’t be fun dreams about bicycles. They’d be like about a spoke,” she said. “There was not even a story, it would just be like, ‘Oh, my gosh, I’ve dreamt about metal pieces. That is insane.’”

I visited Lighthouse Bikes in July. It’s on a street corner in South Portland, with big glass windows, rows of bikes and a map on the back wall marked with each stop from the bike trip. When I meet Day, her blonde-gray hair is in a loose braid. She’s wearing sandals, shorts, a T-shirt “and a black bike shop apron, because I was just changing very greasy, dirty flats before you came,” she said.

Customers stream in throughout the morning. One needs a new helmet, another needs her bike chain fixed.

Day said the work can be tiring. But it’s a good tired, a physical tired. She’s not emotionally exhausted like when she was a therapist.

She’s taking a salary of about $2,500 a month from the shop at this point. And she loves the work. To make this change, Day had to take a risk.

And she said she’s probably more willing to do that because 12 years ago she had eye cancer. She went through radiation, became partially blind in one eye and was given a 20% chance of dying.

So her perspective now is: You don’t get out of life without bad things happening, but “if it’s a guarantee, you might as well do what you want to do,” she said.

And right now, she wants to run the bike shop.