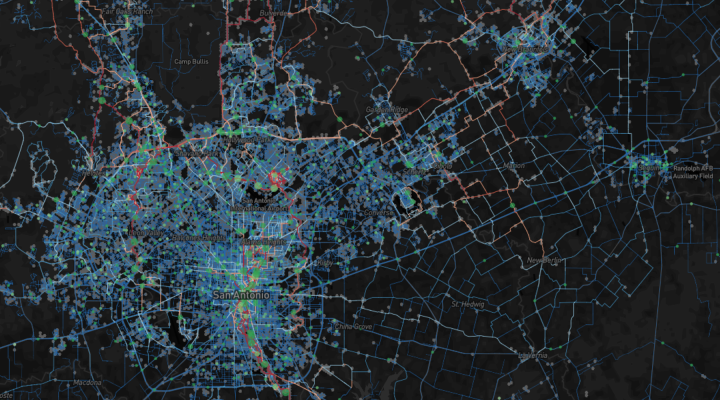 “Excuse us, there’s a lot of us,” said Rick Turnbill as he and a dozen other cyclists weave through cars and pedestrians in downtown San Antonio.

“Who else can ride around the Alamo on their weekly ride?” asked Turnbill.

While he loves this route, Turnbill said the city needs more bike infrastructure to protect cyclists from motorists. Cities across the country are struggling to keep roads safe for bikes as cycling becomes more and more popular for commuting and recreation.

Planners are turning to big data for solutions. Georgia Institute of Technology professor Steven French said the hope is to help chart the path forward on bike infrastructure for city planners. “So they can both plan for where they need to make additional bike lanes and route and then correct smaller scale problems like where there’s problems at particular intersection and crossing,” French said.

The problem for many planners in Texas is they don’t know much about which routes cyclists are traveling. “There’s actually virtually no real data that is consistently maintained for bicycles and pedestrians,” said Teri Kaplan, the state’s bicycle and pedestrian coordinator.

That’s why Texas just paid an undisclosed amount for two years worth of data from the popular cycling app Strava, which has 84,000 Texas users. Strava Metro has been aggregating the data and selling it since 2014 to 100 cities globally. Alex Carroll with the Alamo Area Metropolitan Planning Organization just got the data and is excited. But the data has a bias. “Wealthier, middle-class white males tend to be over represented, minorities and women, less so,” Carroll said.

According to the Texas Department of Transportation, Strava tracks at most 20 percent of the entire biking community, mostly representing guys like Turnbill, who is excited about the development. “Instead of guessing where to put the bike lane or the infrastructure, they can go see what’s being used,” he said. The goal is to ultimately make the roads safer for all commuters, even those not captured in the data.