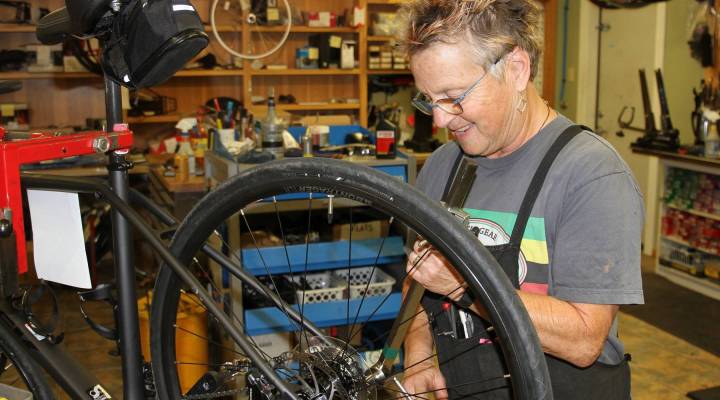 When lawmakers get into discussions about how to pay for roads, bicycles and cycling infrastructure often come up. Some say cyclists don’t pay their share for roads because unlike drivers, they usually don’t pay license or registration fees.

But in Oregon, that’s now an argument with less weight. Oregon is the first state in the nation to tax the sale of bicycles. Yes, Oregon — the state that’s often seen as a haven for cyclists, and regularly ranks in the top ten of the nation’s most bike-friendly states. The legislature passed a rule that adds a $15 tax on bikes that cost $200 or more.

Some say the tax will hurt mom and pop cycling shops. Others say it’s a signal that bike commuters are now even bigger players in the transportation mix.

For Bill Moseley, a councilman in the central Oregon city of Bend, the tax was overdue. “All different road users should pay their fair share,” Moseley said. “Cycling uses the roads, and there’s nothing wrong with the actual users of the road paying for the actual infrastructure that they need.”

In many ways Oregon’s new $15 bike tax is a response to a long and drawn-out battle between drivers and cyclists. Cycling advocates point out that most bicyclists also pay property taxes, or if they have a car — gas taxes. Both fund roads and bike lanes in Oregon.

Jonathan Maus runs a bike advocacy blog called Bike Portland. He argues that if the state wants to meet its goals to reduce traffic congestion and road maintenance costs, lawmakers should encourage cycling, not tax it.

According to a 2014 study, bicycle industry sales in Oregon totaled $440 million.

Dozens of bike shop owners spoke against taxing bikes while the bill, part of a larger transportation package, was making its way through the legislature. They were especially opposed to earlier versions of the proposal, which would have imposed a 3 percent sales tax on bikes. That would have added $60 to the cost of a $2,000 bike.

The $15 flat tax is expected to generate $1.2 million. The state Department of Transportation said that’s roughly the cost of constructing five miles of bike lanes.

Some cycling advocates and bike shop owners were okay with the $15 flat tax.

“I feel like we can hold our heads up a little higher when people say we don’t contribute,” said Barb Bohm-Becker, a mechanic at Sunnyside Sports in Bend, Oregon who specializes in building bike wheels. On a recent summer afternoon, the bike shop was bustling with customers shopping for mountain bikes and cyclists calling to make appointments for tune-ups.

Bohm-Becker sees the tax as a sign that cycling is finally gaining traction in the commuting world. And she believes it’s is small enough that it won’t affect sales at the store.

That’s true for Ross Judice, a physician and cyclist, who’s currently in the market for a new mountain bike.

“My bike is pretty old and it’s kind of falling apart, so it’s either fix it, or buy a new one,” Judice said, perusing the selection at the cycling section at REI in Bend.

Judice said he wouldn’t mind paying the $15 tax on top of the cost of his new bike. Especially since the tax will exclusively fund bicycle and pedestrian transportation projects.

“In those circumstances I don’t mind paying something a little extra if I’m going to get something back from the government,” Judice said.

Many cyclists decided they could live with the bike tax in part because they’re not the only ones paying more with this legislation. The package also increased vehicle registration fees and the statewide gas tax. Overall, funding for cycling and pedestrian infrastructure increased, to the tune of $1.3 billion over the next 10 years. That’s far more than the bike tax alone could pay for.

But in a state that claims to love and promote bicycles, cycling advocate Maus said this tax could have wider repercussions.

“This tax really tarnishes Oregon’s reputation as a bike friendly state. Oregon typically rolls out the red carpet for bicycling, and now the word is going to get out that we want to tax bicycles,” he said.

It seems though, the word has already gotten out. A state lawmaker has pitched the idea for a similar tax on bikes in Colorado.