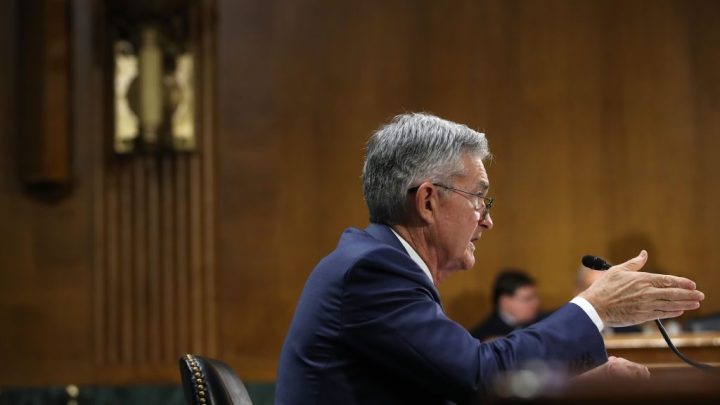 There’s a good chance that when Federal Reserve Chair Jerome Powell takes the press conference podium after the Federal Open Market Committee meeting concludes tomorrow, he’ll announce a cut to the federal funds rate. We know this because Powell has told us as much in an effort to make the Fed more transparent.

“I feel that we have an obligation to explain ourselves,” Powell said in an interview with Marketplace host Kai Ryssdal last year. “I think we’re shifting our focus a little bit to, you know, address the American people more generally and try to explain what we do, why we’re doing it and how we carry out the important jobs that Congress has given us.”

But it wasn’t so long ago that the idea of a Fed trying to “explain” itself was blasphemy. Peter Conti-Brown, a professor and Fed historian at the Wharton School at the University of Pennsylvania, describes the Fed’s communication past as “a tortured history.”

“I think of ‘The Wizard of Oz,'” Conti-Brown said. “I think of the Fed trying to be the wizard to the citizens of Emerald City, but now trying to say, ‘Well, we should invite the visitors from Kansas behind the curtain.'”

Case in point of the Fed trying to be the “wizard”: Alan Greenspan, who was Fed chair from 1987 until 2006. Greenspan was famously obtuse — but that was likely intentional.

“He loved keeping people on their heels, unsure of what the Fed would do next,” Conti-Brown said. “Because that preserved quite a lot of policy space for him and the other central bankers at the FOMC to dominate.”

This all changed when the bottom fell out of the economy in 2008. The Fed decided to open up slightly, and then-Fed Chair Ben Bernanke began giving interviews, including an appearance on “60 Minutes.” On April 27, 2011, Bernanke held the Fed chair’s first press conference after an FOMC meeting. Chair Janet Yellen would continue these under her tenure from 2014 to 2018, holding them quarterly, and Powell decided to hold them after each FOMC meeting beginning in January.

But who exactly is Powell talking to? There’s a farmers market every Friday not too far from Marketplace’s studio in downtown Los Angeles; we stopped by to see if any of the vendors had Powell or the Fed on their radar.

Maria Blakely, who sells microgreens with her husband, Jeremiah, said she found news about the federal funds rate “interesting.”

“I think that if it’s going down, it’s good for business,” Blakely said. “If not, it’s going to affect small businesses like ours a little bit.”

Jim Barkley was selling Thin Krisps nearby (they’re sort of like cheesy croutons). When asked if he felt money policy set by the Federal Reserve affected him much, he said, “Not at this level of business. I don’t think it affects me much.”

“I’m unlikely to go out and get a big loan,” Barkley said. “I think it affects people who have lots of money that they’re getting loans on or maybe even people that are buying houses. I’m not buying a house. I’m a renter.”

According to Conti-Brown at Wharton, Barkley’s feelings are probably right.

“I think it’s wrong to assume that absolutely everyone needs a seat at the table to discuss the technical nitty-gritty of monetary policy,” he said.

That said, perhaps everyone should at least understand it.

“Because the Fed wields such extraordinary power over the day-to-day economic life of anyone who participates in the payment system, anyone who ever borrows or spends money … those people should know who the Fed is and what it does,” Conti-Brown said.

But trying to strike a balance between the legislators who oversee the Fed, the market participants who watch the Fed in order to price in rate hikes and the general American public?

“Those are very different conversations to have,” Conti-Brown said. “And the Fed is trying to have them all simultaneously.”