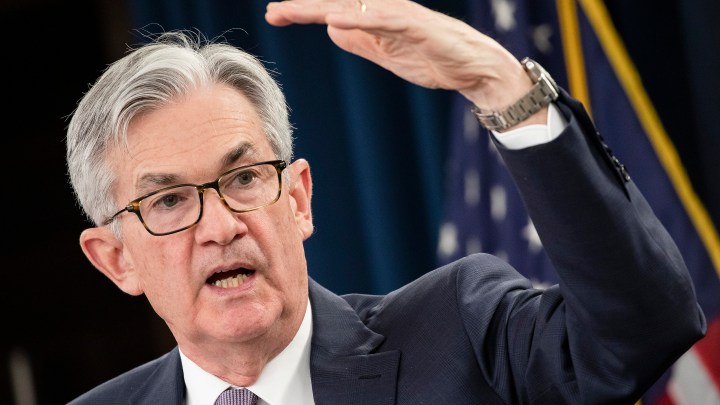 COPY
Listen to Fed Chair Jerome Powell's speech at Jackson Hole on Friday and play along with our bingo board to see which key phrases he mentions. Samuel Corum/Getty Images

Listen to Fed Chair Jerome Powell's speech at Jackson Hole on Friday and play along with our bingo board to see which key phrases he mentions. Samuel Corum/Getty Images
Listen Now

Find our Fed Bingo Card at the bottom of this post.

Federal Reserve Chair Jerome Powell is scheduled to speak at the Fed’s Jackson Hole Economic Symposium on Friday, Aug. 26. Jackson Hole is a gathering of top central bankers from the U.S. and around the world. Academics and journalists also attend. This year’s symposium comes at a tricky time for the Fed. It’s trying to raise interest rates just enough to cool down the economy, without causing a recession. Fed observers will be glued to the action at Jackson Hole.

Fed watching is a delicate art. The central bank doesn’t spell out what it’s going to do. It gives you hints and subtle clues, dropping words from statements or changing the adjectives used to describe the economy. There are some key words to watch for in Fed Chair Jerome Powell’s Jackson Hole speech: “data,” “inflation,” “unemployment,” “supply chain,” “oil,” “Russia” and “soft landing.” (More on that bingo game in a moment.)

Powell likes to say the Fed’s next moves depend on the data — things like the unemployment rate and inflation. Investors are expecting the Fed to slow the pace of interest rate hikes or even start cutting rates next year. Oxford Economics chief U.S. economist Kathy Bostjancic said there are phrases Powell could use to give markets a reality check.

“If he just continues to emphasize that ‘they can’t lose,’ ” Bostjancic said. “He’s used language like that — ‘We can’t lose in this inflation fight.’ If he uses that language again, that’s pretty strong. And maybe that will get investors’ attention.”

Don’t look for Powell to say exactly how much the Fed will raise interest rates at its September meeting. It depends on the data after all, and we’re going to get new unemployment and inflation numbers before then. There is one word Powell won’t use: “transitory.”

In his speech last year at Jackson Hole, Powell said inflation that was just starting to develop was “likely to prove temporary.” He added that, “Today we see little evidence of wage increases that might threaten excessive inflation.”

Well … that didn’t go as planned. That’s why former New York Fed President Bill Dudley said Powell might face a more cynical audience this year, and maybe even doubts about his commitment to the Fed’s 2% inflation target.

“The problem is that there’s a lot of skepticism about whether the Fed really means it,” Dudley said. “In other words, if inflation comes down to 3% and the unemployment rate starts drifting up, does the Federal Reserve relent?”

After all, the Fed is still insisting it can achieve a soft landing, stamping out inflation without sending the economy into a recession. Chris Campbell, chief policy strategist at the global risk consultancy Kroll, will be listening for the “soft landing” phrase. He also said to look for Powell to talk about some things that are out of the Fed’s control.

“Supply chains — those would be oil and gas challenges — lack of some inputs because of the Russia-Ukraine war,” Campbell said.

All of those things would cause — you guessed it — uncertainty.

A word of warning: Powell won’t want to make waves and scare the markets. His speech could be anticlimactic, so you might want to gulp a shot of caffeine every time you hear one of our key words. Just a thought.