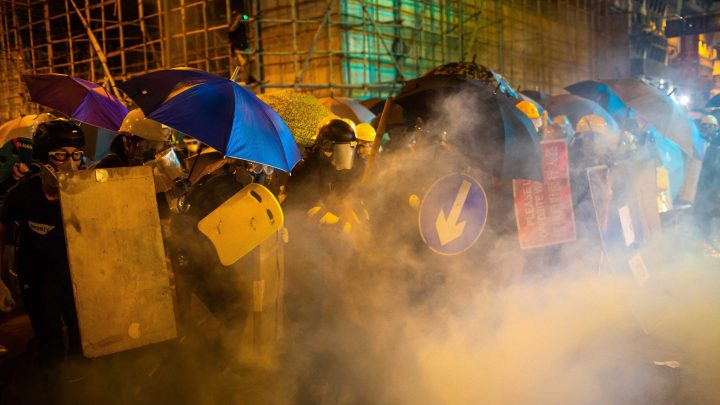 COPY
Protesters are enveloped by tear gas on a street during a demonstration in the area of Sheung Wan on July 28 in Hong Kong. Billy H.C. Kwok/Getty Images

Protesters are enveloped by tear gas on a street during a demonstration in the area of Sheung Wan on July 28 in Hong Kong. Billy H.C. Kwok/Getty Images
Listen Now

The violence continued last weekend, with police firing tear gas and rubber bullets into the crowd as the demonstrations stretched into their eighth week.

Protests began in June over a law that would have eased extradition to mainland China. They have since broadened into a pro-democracy movement that sees hundreds of thousands take to the streets, often shutting down business districts.

The city’s retail association reports sales have dropped by double digits at many stores, with luxury retailers hard hit as big-spending travelers stay away. Flights from Asia have dropped 5% since the protests began in June, according to researcher ForwardKeys.

“The public image of Hong Kong as a safe and stable place is kind of shattered,” said Ho-Fung Hung, a political economist at Johns Hopkins University.

He said Hong Kong’s status as a semi-autonomous territory with its own legal system has been a selling point for international business firms wary of working in China. But if the protests draw intervention from the mainland, that could scare investors away.