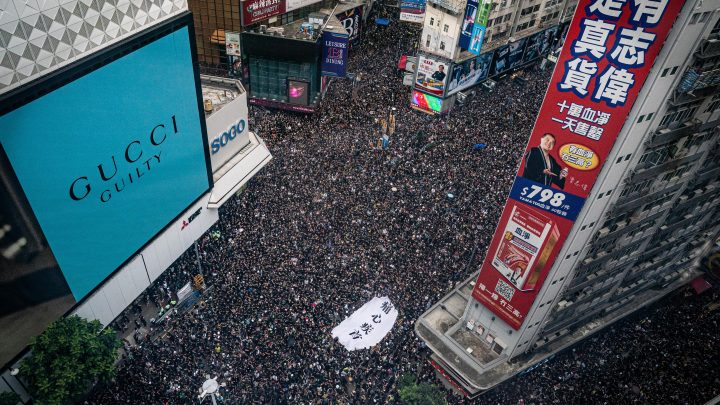 COPY
Protesters take over the streets of Hong Kong last year. The global financial center is at risk of losing its special status with the U.S. Anthony Kwan/Getty Images

Protesters take over the streets of Hong Kong last year. The global financial center is at risk of losing its special status with the U.S. Anthony Kwan/Getty Images
Listen Now

The fate of Hong Kong as a global financial center stands in the balance.

Hong Kong falls in a unique diplomatic space: it’s part of China but is promised freedom of speech, media and protest. Last week, the Chinese Communist Party made plans to directly crack down on dissent in Hong Kong, following a year of deadly protests there.

That’s when the Trump administration threatened to undo U.S. policy on Hong Kong, which gives the territory special economic treatment.

The U.S. business community urged the U.S. to stand down Tuesday, saying it would hurt the interests of some 1,300 American companies there.

For nearly three decades, the U.S. has given Hong Kong special status — letting goods flow back and forth without tariffs and people to fly in and out with no visas. Other countries do the same. That makes Hong Kong a vital business hub, according to Fraser Howie, an independent financial analyst in Singapore.

“A lot of companies choose Hong Kong to adjudicate their disputes with Chinese companies,” Cabestan said. “There are judges from Australia or Canada sitting together with local Hong Kong judges.”

Still, U.S. officials have threatened to revoke Hong Kong’s status to counter what they see as Beijing’s aggression. That would be the “nuclear option,” said Ho-Fung Hung, professor of political economy at Johns Hopkins.

“If the U.S. really revokes the trading status permanently, there will be no turning back. China will definitely change its policy toward Hong Kong,” Hung said.

In other words, accelerate the end of financial Hong Kong as we know it. Hung and others think the Trump administration may choose partial sanctions instead, like restricting U.S. exports to Hong Kong.